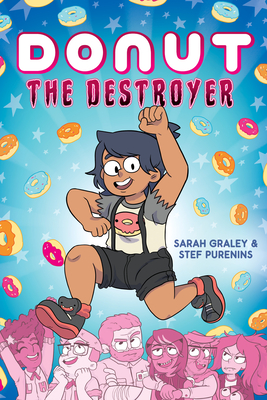 A hilarious and unique graphic novel of friendship, family, and what happens when you defy and exceed expectations.
Donut (middle name: The; last name: Destroyer) has a heart of gold and incredible strength. She lives in a world where everyone is born with a special ability and can choose whether to develop it for good or evil. Donut has just received the best news of her life -- she's been accepted to Lionheart School for Heroes! But her parents are the most infamous villains around, and her best friend, Ivy, can't understand why Donut would choose a life of boring heroism and ruin their plans to cause chaos. Donut is determined to prove that, despite her last name, she's meant to go her own way and be a hero. Meanwhile, Ivy cooks up a plan to get Donut kicked out of Lionheart -- and back on track to villainy!

Praise For Donut the Destroyer…

Praise for Donut the Destroyer:

"A strong role model who has the self-confidence to change tracks despite her friends and family's expectations, Donut will readily endear herself to readers." -- School Library Journal

"This graphic novel is full of school drama, friendship, and epic battles of good and evil... A sweet fish-out-of-water, new-school romp." -- The Bulletin of the Center for Children's Books

"Graley's artwork is immediately disarming, setting the tone with all the comfort and character of a Matt Groening cartoon -- and the humor, too." -- Booklist

"Sarah Graley is a formidable talent. She has an enormously deft hand at comedic timing, expression, and color." -- Kate Beaton, #1 New York Times bestselling author of Hark! A Vagrant

"The bright, rich color palette matches the upbeat and zany personality of the characters, game world, and conflict." -- Kirkus Reviews

"The story's greatest strength is Graley's strong sense of humor, as Izzy's hilarious commentary on everything from her parents to video-game culture is spot-on and delightful. An epic win." -- Booklist

Sarah Graley is a cartoonist who lives in Birmingham, UK, with four cats and her partner, Stef! She’s the creator of books like Glitch, Kim Reaper, and her long-running diary comic Our Super Adventure. She was the artist on the first official Minecraft graphic novel, and the writer and artist on the Diamond Gem Award-nominated Rick and Morty comics miniseries Lil’ Poopy Superstar. Visit Sarah online at sarahgraley.com.

Stef Purenins is a comics writer, letterer, designer, and color assistant who lives in Birmingham, UK, with four cats and his partner, Sarah! He co-writes Our Super Adventure, and he also letters and color assists some of her other comics, too!
Loading...
or support indie stores by buying on