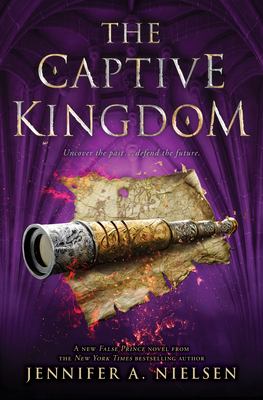 Acclaimed author Jennifer A. Nielsen marks a return to the world of her beloved New York Times bestseller The False Prince in this highly anticipated fourth book of the Ascendance Series!
In a peaceful Carthya, Jaron leads as the Ascendant King with Imogen beside him -- but the peace he fought so long for is not destined to last.

On a routine sea voyage, Jaron's ship is brutally attacked, and he is taken hostage. The mysterious captors and their leader, Jane Strick, accuse Jaron of unthinkable acts. They are also in possession of some shocking items -- including the crown and sword that belonged to Jaron's older brother, Darius. The items unearth a past Jaron thought he had put behind him.

Though it seems impossible, Jaron must consider: Could Darius be alive? And what does Strick want from Jaron? Against his will, Jaron will be pulled back into a fight for the throne -- and a battle to save his kingdom.

Praise For The Captive Kingdom (The Ascendance Series, Book 4)…

Praise for the Ascendance Series:

Praise for The Traitor's Game:

"Nielsen creates wonderful characters in all of her novels, and she is especially talented at writing complex, intriguing females who refuse to fit into any neat categories. The first in her engrossing Traitor's Game series introduces readers to another fascinating heroine, who disrupts the plans and plots laid to trap her and insists on controlling her own narrative....Engrossing, emotional and offers plenty of promise for the series to come." -- RT Book Reviews

"This rip-roaring tale has action galore with battle scenes, kidnappings, murder, intrigue, and romance....Nielsen has created a compelling world where little is as it seems." -- School Library Connection

Jennifer A. Nielsen is the acclaimed author of the New York Times and USA Today bestselling Ascendance Series: The False Prince, The Runaway King, The Shadow Throne, and The Captive Kingdom, coming in Fall 2020. She also wrote the New York Times bestselling Mark of the Thief trilogy: Mark of the Thief, Rise of the Wolf, and Wrath of the Storm; the stand-alone fantasy The Scourge; the historical thrillers A Night Divided, Resistance, and Words on Fire; the second book in the Horizon series, Deadzone; Book Six of the Infinity Ring series, Behind Enemy Lines; and The Traitor's Game series: The Traitor's Game, The Deceiver's Heart, and The Warrior's Curse. Jennifer lives in northern Utah with her husband, their children, and a perpetually muddy dog.
or support indie stores by buying on