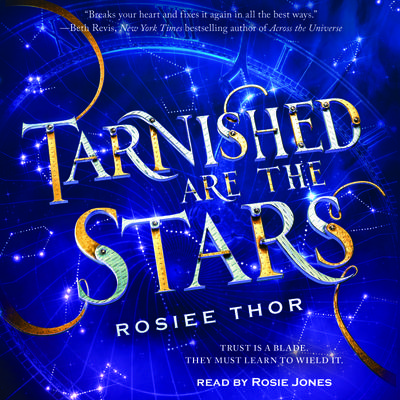 Tarnished are the Stars (Digital Audiobook)

The Lunar Chronicles meets Rook in this queer #OwnVoices science-fantasy novel, perfect for fans of Marissa Meyer and Sharon Cameron.
A secret beats inside Anna Thatcher's chest: An illegal clockwork heart. Anna works cog by cog -- donning the moniker Technician-- to supply black market medical technology to the sick and injured, against the Commissioner's tyrannical laws. Nathaniel Fremont, the Commissioner's son, has never had to fear the law. Determined to earn his father's respect, Nathaniel sets out to capture the Technician. But the more he learns about the outlaw, the more he questions whether his father's elusive affection is worth chasing at all. Their game of cat and mouse takes an abrupt turn when Eliza, a skilled assassin and spy, arrives. Her mission is to learn the Commissioner's secrets at any cost -- even if it means betraying her own heart. When these uneasy allies discover the most dangerous secret of all, they must work together despite their differences and put an end to a deadly epidemic -- before the Commissioner ends them first.

Rosiee Thor began her career as a storyteller by demanding to tell her mother bedtime stories instead of the other way around.
She remained bossy through college, where she received a lot of dance trophies and a degree in medieval history, all of which are
now purely decorative. She lives in Oregon with a dog, two cats, and four complete sets of Harry Potter. Tarnished Are the Stars is
her first novel. Follow her online at rosieethor.com.