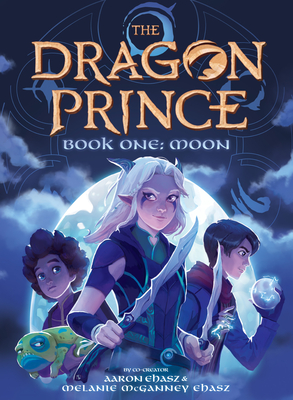 With their world on the brink of war, three young heroes from opposite sides of the conflict embark on a dangerous quest that could change everything. This beautiful book expands on the events of Season 1 of the hit Netflix show The Dragon Prince.
WAR IS COMING . . .

Four full moons past, humans crossed into the magical lands of Xadia and committed an unspeakable crime: They destroyed the only egg of the Dragon King and Queen. Now a young Moonshadow elf assassin has been sent on her first mission; she will make the humans pay for their heinous act.

But before she can complete her task, she and two human
princes make an astonishing discovery . . . a discovery that could change everything.

And so the three reluctant allies set off in a desperate attempt to stop the coming war. Their journey won't be easy, but the trio soon learns that the most serious threat to their quest can't be fought with magic or physical strength. Can these young heroes overcome the longstanding hatred between humans and elves, and restore peace to their world?

Written by Aaron Ehasz (co-creator of The Dragon Prince and head writer of Avatar: The Last Airbender) and Melanie McGanney Ehasz, this first canon novel based on the Netflix original series finally gives fans the full story.

Praise For Book One: Moon (The Dragon Prince #1)…

Praise for The Dragon Prince on Netflix:

"The Dragon Prince offers viewers a rich and suggestive world that's teeming with possibilities about what might be happening beyond the frame." -- The Verge

"The Dragon Prince Is a Fantasy Knockout." -- Phoenix New Times

Aaron Ehasz grew up in Baltimore, Maryland. He went to Harvard University, where he was president of the Harvard Lampoon and concentrated in philosophy, with the obvious goal of one day making cartoons and video games. Aaron was the head writer of the beloved series Avatar: The Last Airbender and is a co-creator of The Dragon Prince.