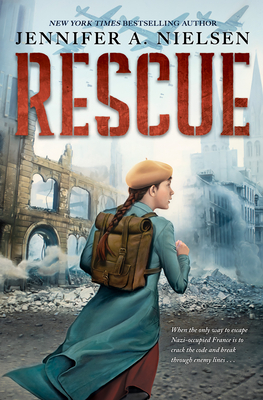 From New York Times bestselling author Jennifer A. Nielsen comes a thrilling World War II story of espionage and intrigue, as one girl races to save her father and aid the French resistance.
Six hundred and fifty-seven days ago, Meg Kenyon's father left their home in France to fight for the Allies in World War II, and that was the last time Meg saw him. Recently, she heard he was being held prisoner by the Nazis, a terrible sentence from which Meg fears he'll never return. All she has left of him are the codes he placed in a jar for her to decipher, an affectionate game the two of them shared. But the codes are running low, and soon there'll be nothing left of Papa for Meg to hold on to at all.

Suddenly, an impossible chance to save her father falls into Meg's lap. After following a trail of blood in the snow, Meggie finds an injured British spy hiding in her grandmother's barn. Captain Stewart tells her that a family of German refugees must be guided across Nazi-occupied France to neutral Spain, whereupon one of them has promised to free Meg's father. Captain Stewart was meant to take that family on their journey, but too injured to complete the task himself, he offers it to Meg, along with a final code from Papa to help complete the mission -- perhaps the most important, and most difficult, riddle she's received yet.

As the Nazis flood Meg's village in fierce pursuit, she accepts the duty and begins the trek across France. Leading strangers through treacherous territory, Meg faces danger and uncertainty at every turn, all the while struggling to crack her father's code. The message, as she unravels it, reveals secrets costly enough to risk the mission and even her own life. Can Meg solve the puzzle, rescue the family, and save her father?

Praise for Words on Fire:

* "Gripping... Audra's story deserves a place on the shelf next to Lois Lowry's Number the Stars and Marcus Zusak's The Book Thief." -- Booklist, starred review

"[This] adventure about a little-known place and time... delivers action and suspense." -- Kirkus Reviews

"There is much on offer in this novel: family love, patriotism, magic, and the importance of books... Highly recommended." -- School Library Connection

"The edge-of-your-seat climax places readers amidst the gritty, horrifying street battles of the Warsaw Ghetto and pays tribute to those who sacrificed themselves so others would live... Historical fiction at its finest, this informs, enlightens, and engages young readers." -- School Library Journal

"Suspense mounts continually as Chaya survives her ordeals, gaining strength and faith in her mission. The courage and self-sacrifice of many characters is inspiring." -- Publishers Weekly

"A marvelously crafted historical novel about courage, perseverance and the will to survive, A Night Divided excels in every regard." -- Reading Eagle

"History buffs will drool over the magnificently told tale, but even reluctant readers will become immersed in the tension-filled exploits." -- Voice of Youth Advocates

"Like Anne Frank before her, Gerta is small but mighty, a hardheaded heroine who dreams up big ideas and refuses to give up in the face of adversity and danger." -- Publishers Weekly


Praise for The Traitor's Game:

"Nielsen creates wonderful characters in all of her novels, and she is especially talented at writing complex, intriguing females who refuse to fit into any neat categories. The first in her engrossing Traitor's Game series introduces readers to another fascinating heroine, who disrupts the plans and plots laid to trap her and insists on controlling her own narrative... Engrossing, emotional and offers plenty of promise for the series to come." -- RT Book Reviews

"This rip-roaring tale has action galore with battle scenes, kidnappings, murder, intrigue, and romance... Nielsen has created a compelling world where little is as it seems." -- School Library Connection

"The Traitor's Game by Jennifer A. Nielsen, is an action-packed story that leaves you yearning for more. The new book is an amazing addition to Nielsen's repertoire... Fit with a feisty heroine and some tough kidnappers, The Traitor's Game keeps you on the edge of your seat throughout." -- The Missourian

A Chicago Public Library "Best of the Best" Children's Book

Jennifer A. Nielsen is the acclaimed author of the New York Times and USA Today bestselling Ascendance Series: The False Prince, The Runaway King, The Shadow Throne, and The Captive Kingdom, coming in Fall 2020. She also wrote the New York Times bestselling Mark of the Thief trilogy: Mark of the Thief, Rise of the Wolf, and Wrath of the Storm; the stand-alone fantasy The Scourge; the historical thrillers A Night Divided, Resistance, and Words on Fire; the second book in the Horizon series, Deadzone; Book Six of the Infinity Ring series, Behind Enemy Lines; and The Traitor's Game series: The Traitor's Game, The Deceiver's Heart, and The Warrior's Curse. Jennifer lives in northern Utah with her husband, their children, and a perpetually muddy dog.
Loading...
or support indie stores by buying on