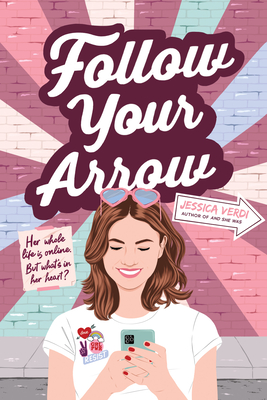 For fans of Becky Albertalli and Adam Silvera, this is a riveting and irresistible take on love, life, and identity -- both online and off.
CeCe Ross is kind of a big deal. She and her girlfriend, Silvie, are social media influencers with zillions of fans and followers, known for their cute outfits and being #relationshipgoals.

So when Silvie breaks up with her, CeCe is devastated. She's lost her first love, and now she can't help but wonder if she'll lose her followers as well.

Things get even messier when CeCe meets Josh, a new boy in town who is very much Not Online. CeCe isn't surprised to be falling for a guy; she's always known she's bi. And Josh is sweet and smart and has excellent taste in donuts... but he has no idea that CeCe is internet-famous. And CeCe sort of wants to keep it that way.

But when CeCe's secrets catch up to her, she finds herself in the middle of an online storm, where she'll have to confront the blurriness of public vs. private life, and figure out what it really means to speak her truth.

Praise for And She Was:

"Verdi just gets better and better with every book. And She Was is a beautiful, multilayered journey of love, understanding, and empathy that made me want to be a better daughter, ally, and person." -- Dahlia Adler, author of Under the Lights

"A heart-tugging, powerful story of family, identity, and the struggle for acceptance. A beautiful novel that treats every moment with incredible care, Jessica Verdi's latest is a different kind of love story -- one about loving yourself, your family, and your life. And it features my favorite mother-daughter relationship since Gilmore Girls." -- Corey Ann Haydu, author of OCD Love Story

"An engrossing story about the collision of big, grand dreams and long-held life-saving family secrets. I could not stop turning pages and cheering for Dara." -- Caela Carter, author of Tumbling

"And She Was took me right back to my adolescence, a time when I was struggling to come to terms with my trans parent's identity while figuring out my own." -- Emmy-nominated documentary filmmaker Sharon Shattuck

* "Verdi's respect and care are evident in every character in the book . . . A triumph -- an exquisite mirror in which trans parents and their children will see themselves. And for once, the reflection won't break their hearts." -- Kirkus Reviews, starred review

"The message of love and support here rings clear." -- Bulletin of the Center for Children's Books


Praise for What You Left Behind:

* "Verdi eloquently details the trials and tribulations of being a single teen dad... [Verdi] holds nothing back... An excellent addition to YA collections." -- School Library Journal, starred review


Praise for The Summer I Wasn't Me:

"This title is recommended as a quality piece of fiction in a teen collection, and especially as part of an LGBTQ collection." -- Voice of Youth Advocates


Praise for My Life After Now:

"Debut author Verdi paints Lucy's devastation and her tangled emotions with honesty and compassion... Information about living with HIV is peppered throughout, but Verdi's novel never preaches, instead telling Lucy's story with realism and hope." -- Publishers Weekly

Jessica Verdi is the author of And She Was, My Life After Now, The Summer I Wasn't Me, and What You Left Behind. She is a graduate of The New School's MFA in Writing for Children program and lives in New York. You can find her online at jessicaverdi.com.
Loading...
or support indie stores by buying on