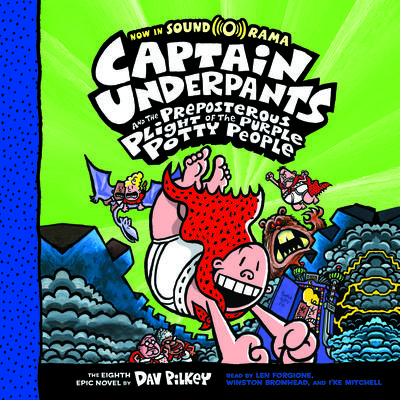 When we last saw George and Harold, they were about to take their pet pterodactyl Crackers back to the Cretaceous period.
But things didn't work out quite as they had hoped. They've entered an absurd alternate reality where teachers are nice, kids are
allowed to read banned books, and the cafeteria food doesn't smell like dirty diapers. Even worse, they've discovered alternate
versions of themselves--Evil George and Evil Harold--who plan to unleash some preposterous plans on Piqua, Ohio. Now it's up to
George and Harold to defeat the evil twins and THEIR superhero, Captain Blunderpants!

Dav has gone on to create award-winning and bestselling books for children. His Captain Underpants series has more than 80
million copies in print worldwide and has been translated into more than 28 languages. Dav’s latest creation, Dog Man, continues to be a #1 New York Times
bestselling series with more than 23 million copies in print worldwide and translations available in more than 32 languages. Dav is
also the creator of the Dragon series, the Dumb Bunnies series, Dog Breath, and The Paperboy, which is a Caldecott Honor Book.
Dav lives in the Pacific Northwest with his wife.