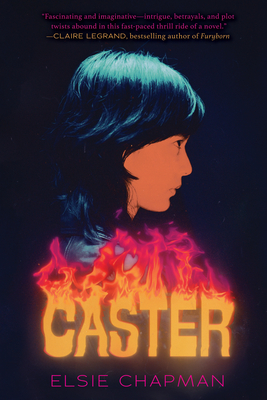 Elsie Chapman grew up in Prince George, Canada, and has a degree in English literature from the University of British Columbia. She is the author of the YA novels Dualed, Divided, Along the Indigo, and Caster as well as the middle-grade novel All the Ways Home, and the coeditor of A Thousand Beginnings and Endings and Hungry Hearts. She currently lives in Tokyo, Japan, with her family. You can visit her online at elsiechapman.com.

* "Chapman's constructed magic is a complex, balanced system that limits the characters to keep the narrative unpredictable; the battle scenes are creative and fast paced, and the high stakes that Aza faces in her personal life and during the tournament are anxiety-inducing in their believability. Information Aza uncovers about the secrets in her life are parsed out so that the plot never drags; readers will have a hard time putting this one down." -- The Bulletin of the Center for Children's Books, starred review

"A dark and, at times, vicious and violent story of will and questionable honor." -- Kirkus Reviews
or support indie stores by buying on
Copyright © 2020 American Booksellers Association