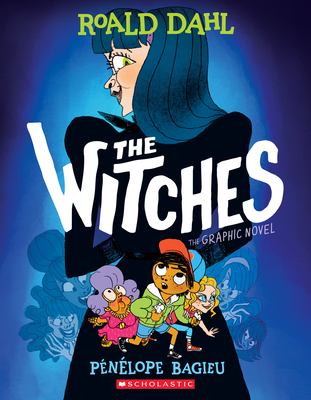 Roald Dahl's darkly funny masterpiece, The Witches, now available as a graphic novel from Eisner Award-winning artist Pénélope Bagieu!
Witches are real, and they are very, very dangerous. They wear ordinary clothes and have ordinary jobs, living in ordinary towns all across the world -- and there's nothing they despise more than children. When an eight-year-old boy and his grandmother come face-to-face with the Grand High Witch herself, they may be the only ones who can stop the witches' latest plot to stamp out every last child in the country!

This full-color graphic novel edition of Roald Dahl's The Witches, adapted and illustrated by Eisner Award winner Pénélope Bagieu, is the first-ever Dahl story to appear in this format. Graphic novel readers and Roald Dahl fans alike will relish this dynamic new take on a uniquely funny tale.

Praise For The Witches: The Graphic Novel…

Praise for Brazen by Pénélope Bagieu:

"Bagieu's pen transforms these true stories into something that has the tone of a personalized fairy tale. And in the end, this turns out to be just perfect." -- The New York Times

Praise for California Dreamin': Cass Elliot Before The Mamas & the Papas by Pénélope Bagieu:

"Bagieu's drawings are superlative: soft pencil lines that convey detail without constraining her figures and that animate the characters' exuberant facial expressions." -- The Paris Review

"Pénélope Bagieu has mastered a magic trick... she can turn paper into flesh. And ink becomes lifeblood... her characters not only breathe and pulsate with vivid life. They also seem entirely, organically authentic in their own skin." -- The Washington Post

Roald Dahl was a spy, ace fighter pilot, chocolate historian, and medical inventor. He was also the author of Charlie and the Chocolate Factory, Matilda, The BFG, and many more brilliant stories. He remains the world's number one storyteller.

Pénélope Bagieu was born in Paris in 1982, a few months after the original publication of Roald Dahl's The Witches. She is the bestselling author of several graphic novels, including the Harvey Award winner California Dreamin’ and Eisner Award winner Brazen: Rebel Ladies Who Rocked the World, which has been translated into 17 languages and adapted into an animated series. Pénélope Bagieu lives in Paris.
Loading...
or support indie stores by buying on