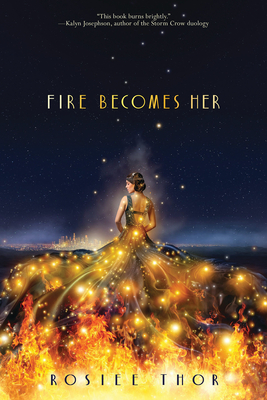 In Rosiee Thor's lavish fantasy novel with a Jazz Age spark, a politically savvy teen must weigh her desire to climb the social ladder against her heart in a world where magic buys votes.
Flare is power.

With only a drop, one can light the night sky with fireworks . . . or burn a building to the ground. The few flare families on top -- the so-called "elite" -- hoard the magical resource for themselves, and seventeen-year-old Ingrid Ellis wants her fair share.

Ingrid doesn't have a family fortune, monetary or magical, but at least she has a plan: Rise to the top on the arm of Linden Holt, heir to a hefty political legacy and the largest fortune of flare in all of Candesce. Her only obstacle is Linden's father, Senator Walden Holt, who refuses to acknowledge their relationship.

When Senator Holt announces his run for president, however, Ingrid uses the situation to her advantage. She strikes a deal to spy on Gwendolyn Meyers, the Holts's opposition, in exchange for the senator's approval. But the more Ingrid learns about the world around her, the more she questions where her true allegiances lie.

Suddenly, Ingrid finds herself at an impasse: Will she stand with the Holts, who have the power and influence to give Ingrid everything she so desperately desires? Or will she forge her own path with Gwendolyn in hopes of building a better future for everyone?

Praise For Fire Becomes Her…

Praise for Tarnished Are the Stars

"A stunning debut by a brilliant new voice in YA, breaks your heart and fixes it again in all the best ways." --Beth Revis, New York Times bestselling author of Across The Universe


"Tarnished Are The Stars has everything my heart's been craving: rich world building, gorgeous writing, and a cast of queer characters getting the adventure they deserve. A stunning debut by a talented author who has only just begun." --Kass Morgan, New York Times bestselling author of The 100


"A heart-wrenching tale about found families, tender friendships, and a trio of characters you can't help but love." --Linsey Miller, author of the Mask of Shadows duology

"Fans of Marissa Meyer's Lunar Chronicles will enjoy this steampunk adventure starring a trio of queer teens from different social strata who are not just on a world-saving mission but are fearlessly and tenderly exploring the difference between legality and morality, discovering language for their identities, and challenging systems and perpetuators of oppression. Thor's debut would make an important and delightful addition to any collection." --Booklist

Rosiee Thor began her career as a storyteller by demanding that her mother listen as Rosiee told bedtime stories instead of the other way around. She lives in Oregon with a dog, two cats, and four complete sets of Harry Potter, which she loves so much, she once moved her mattress into the closet and slept there until she came out as queer. Follow her online at rosieethor.com and on Twitter @rosieethor.
Loading...
or
Not Currently Available for Direct Purchase