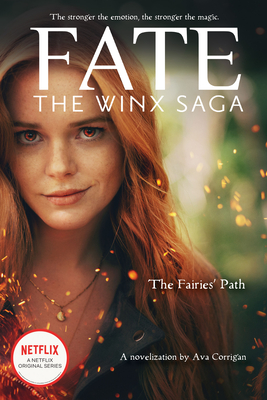 Don't miss this bold new reinvention of the classic animated Winx Club series! This is the first YA novel based on the new NETFLIX series Fate: The Winx Saga. It is a retelling of the first season packed with bonus scenes and character backstory not seen on the show.

At the Alfea International School, students come from all over the Otherworld to train. To learn magic. To discover how to control their powers. Inside the school's castle, five students-complete strangers-are assigned as roommates:

Aisha is an athlete and a classic overachiever whose control over water is the envy of her fellow students.

Terra is an awkward do-gooder whose power over the natural world can overwhelm rivals unexpectedly.

Musa is an introvert who keeps to herself so her mind isn't overwhelmed by the emotions of those around her.

Stella is a princess - yes, a real princess - whose command over light inspires but also intimidates.

And then there's Bloom, the outsider, the girl from the human world whose power over fire almost destroyed her family.

These five teenagers want what every teenager wants . . . to figure out who they are. To make friends. To fit in at their new school. But when an ancient, long-vanquished evil suddenly resurfaces outside the castle walls, these five teenagers be forced to put their powers to the test. And they'll discover a secret so powerful, it will challenge everything they know about the Otherworld . . . and themselves.

Ava Corrigan is a pen name for Sarah Rees Brennan, the author of The Demon’s Lexicon and Lynburn Legacy series; Tell the Wind and Fire and In Other Lands; and three original novels based on the hit Netflix show Chilling Adventures of Sabrina. She lives in Ireland.