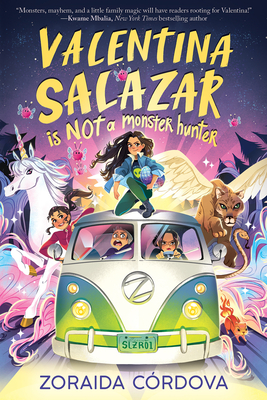 Valentina Salazar is not a Monster Hunter

It takes a special person to end up in detention on the last day of school.

It takes a REALLY special person to accidentally burn down the school yard while chasing a fire-breathing chipmunk.

But nothing about Valentina Salazar has ever been “normal.” The Salazars are protectors, tasked with rescuing the magical creatures who sometimes wander into our world, from grumpy unicorns to chupacabras . . . to the occasional fire-breathing chipmunk.

When Val’s father is killed during a rescue mission gone wrong, her mother decides it’s time to retire from their life on the road. She moves the family to a boring little town in upstate New York and enrolls Val and her siblings in real school for the first time.

But Val is a protector at heart and she can’t give up her calling. So when a mythical egg surfaces in a viral video, Val convinces her reluctant siblings to help her find the egg before it hatches and wreaks havoc. But she has some competition: the dreaded monster hunters who’ll stop at nothing to destroy the creature . . . and the Salazar family.


Praise For Valentina Salazar is not a Monster Hunter…

Praise for Valentina Salazar is Not a Monster Hunter:

* "With a gutsy, lionhearted protagonist, an inventive cryptid menagerie, and a sensitive portrayal of grief’s effect on individuals and familial dynamics as seen through young eyes, Córdova’s narrative comes aglow as it unfolds, radiating warmth, humor, and a love of the fantasy genre on each and every page." --Publishers Weekly, Starred Review

* "From the author who created the Brooklyn Brujas trilogy, Córdova brings a new fantastical adventure to younger readers. Córdova crafts an adventure story to explain a standard lesson that monsters (like humans) are not all bad and can be misunderstood. A wonderful read that shows people should never underestimate the power of family—or their youngest siblings!" --Booklist, Starred Review

"Middle grade fantasy at its finest, led by a protagonist who has as much spirit and fire as the monsters she’s sworn to protect.” -- Rena Barron, author of Maya and the Rising Dark

“A wondrous journey, full of friendship, family, and self-discovery. It has everything I look for in a book—heart, humor, and an innovative magic system.” -- Alex Aster, award-winning author of the Emblem Island series

Praise for The Way To Rio Luna

*“Córdova infuses Danny’s quest with friendship, whimsy, and boundless creativity . . . the result is a revised canon of children’s fantasy literature to center a global mythology, heralded by children of color. With its diverse, fully-realized cast of characters and inventive world-building, this complex adventure quest is a rare treat for fantasy lovers and those who believe in magic.” –School Library Journal, Starred Review

“Córdova takes classic fairy-tale tropes and structure and modernizes them, adding diversity and providing a fresh storyline that a broad group of children will be able to relate to. Fans of the Narnia books or Norton Juster’s The Phantom Tollbooth will delight in this microcosmic story-within-a-story, full of secrets and surprises and overflowing with introductions to a host of whimsical characters.” –Booklist, Starred Review

Zoraida Córdova is the award-winning author of the Brooklyn Brujas series, The Vicious Deep trilogy, and Star Wars: A Crash of Fate. She has contributed stories to the New York Times bestselling anthology Star Wars: From a Certain Point of View, and Toil & Trouble: 15 Tales of Women and Witchcraft. Zoraida was born in Ecuador and raised in Queens, New York.
Loading...
or support indie stores by buying on