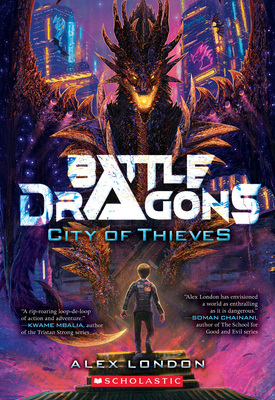 In a modern mega-city built around dragons, one boy gets caught up in the world of underground dragon battles and a high-stakes gang war that could tear his family apart.

Once, dragons nearly drove themselves to extinction. But in the city of Drakopolis, humans domesticated them centuries ago. Now dragons haul the city’s cargo, taxi its bustling people between skyscrapers, and advertise its wares in bright, neon displays. Most famously of all, the dragons battle. Different breeds take to the skies in nighttime bouts between the infamous kins—criminal gangs who rule through violence and intimidation.

Abel has always loved dragons, but after a disastrous showing in his dragon rider’s exam, he's destined never to fly one himself. All that changes the night his sister appears at his window, entrusting him with a secret...and a stolen dragon.

Turns out, his big sister is a dragon thief! Too bad his older brother is a rising star in Drakopolis law enforcement...

To protect his friends and his family, Abel must partner with the stolen beast, riding in kin battles and keeping more secrets than a dragon has scales.

When everyone wants him fighting on their side, can Abel figure out what's worth fighting for?

Praise for City of Thieves:

"Alex London has envisioned a world as enthralling as it is dangerous—a society much like our own if it was built on the backs of giant fire-breathing dragons. Readers are sure to burn through the pages as they follow Abel through the shadowy underbelly of Drakopolis, dodging dragon-rider street gangs and a ruthless secret police to save his family. Abel is an endearing and relatable hero struggling under expectations as the youngest of three siblings, and his journey in building self-confidence is sure to ring true with young readers. Above all, cutting through the action is a moving tale of friendship and family, which is at the heart of this thrilling fantasy."

— Soman Chainani, author of The School for Good and Evil series

"A rip-roaring loop-de-loop of action and adventure, Battle Dragons will keep readers at the edge of their seat as they cheer on Abel and his friends."

Alex London is the author of over 25 books for children, teens, and adults with over 2 million copies sold. He’s the author of the middle grade Dog Tags, Tides of War, Wild Ones, and Accidental Adventures series, as well as two titles in The 39 Clues. For young adults, he’s the author of the acclaimed cyberpunk duology Proxy, and the epic fantasy trilogy, The Skybound Saga. A former journalist covering refugee camps and conflict zones, he can now be found somewhere in Philadelphia, where he lives with his husband and daughter or online at www.calexanderlondon.com.
Loading...
or support indie stores by buying on