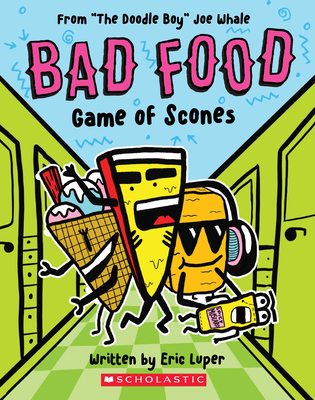 An all-new original series featuring the art of viral sensation Joe Whale, AKA the Doodle Boy, and fan-favorite Eric Luper!

Somewhere deep within the walk-in pantry at Belching Walrus Elementary lives an array of different foods that live in harmony. There are baskets of fruits and veggies, a cooler filled with chocolate milks and apple juices, and a freezer for ice-creams and yet-to-be-nuked chicken fingers.

One day, the Supplies from the Principal's office show up and insist on sharing the coolness of the cooler. Their ruler is a ruler (pun intended) named Baron von Lineal. The Baron argues that they work harder than anyone in Belching Walrus Elementary while food just sits around. As such, the residents of the pantry have no choice but to open their doors. Anyhow, there's plenty of room in the cooler for everyone, right? Wrong! The Baron and his cohorts take over the pantry in no time!

To free their fellow food, it's up to three young heroes Slice, Scoop, and Totz to venture out of the pantry and foil the Baron's plan for good. It's an epic, hilarious story kids will love.


Praise For Game of Scones: From “The Doodle Boy” Joe Whale (Bad Food #1)…

“A food fight for the ages, epic in both action and laughs.” – Kirkus Reviews

Eric Luper has written books for kids of all ages, including the YA novel Seth Baumgartner's Love Manifesto. He loves excitement and is always looking for his next adventure. Eric has fibbed his way into a tour of the ultra-secret PEZ headquarters, rebuilt a castle in France, explored the tunnels under Paris and Istanbul, escaped hungry crocodiles in Costa Rica, and rafted down the Colorado River. He lives with his family in Albany, New York.
Joe Whale AKA the Doodle Boy is a ten-year-old boy from the UK whose artwork went viral after he was commissioned by a local restaurant to decorate an eight-foot wall. Since then, he has been interviewed by the Insider and appeared on Ellen Degeneres’s Little Big Shots (hosted by Melissa McCarthy). He has also been sought after by corporate offices, hotels, and restaurants to fill their walls with his illustrations.
Loading...
or support indie stores by buying on