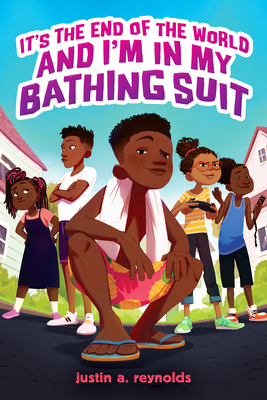 A hilarious new middle-grade from Justin A. Reynolds that asks: What happens when five unsupervised kids face the apocalypse under outrageously silly circumstances?

Twelve-year-old Eddie Gordon Holloway has concocted his most genius plan ever to avoid chores . . . especially the dreaded L-A-U-N-D-R-Y. If he can wears every item of clothing in his wardrobe, summer will be halfway over before he has to do laundry!

On the day of the highly anticipated Beach Bash, Eddie ends up grounded until he can get his clothes clean. While left home alone to do his laundry, the power goes out mid-cycle. With his first load of laundry soaking wet and the rest still filthy, Eddie sets out to explore the seemingly empty neighborhood in just his swim trunks and flip-flops.

Praise for It's the End of the World and I'm In My Bathing Suit:

* "A doomsday scenario is rendered surprisingly funny here . . . and so readers are given freedom to enjoy [Eddie's] brilliant quips, his quirky friends, and this highly unusual day without dwelling on what comes after this trange, golden afternoon when kids ran the neighborhood." -- BCCB, starred review

"With Reynolds' signature witticisms and jump-off-the-page jokes....[this is] equal parts friendship story, coming of age, and comedic apocalypse, this will be a great red for reluctant readers and kids looking to take their summers into their own hands." -- Booklist

Justin A. Reynolds has always wanted to be a writer. Opposite of Always, his debut novel, was an Indies Introduce selection, a School Library Journal Best Book, has been translated in 17 languages, and is being developed for film with Paramount Players. He hangs out in northeast Ohio with his family and likes it, and is probably somewhere, right now, dancing terribly. His second novel, Early Departures, published September 2020. You can find him at justinareynolds.com.
Loading...
or support indie stores by buying on