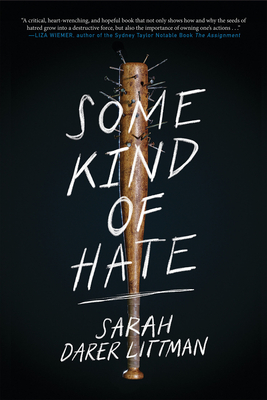 Some Kind of Hate

“A critical, heart-wrenching, and hopeful book that not only shows how and why the seeds of hatred grow into a destructive force, but also the importance of owning one’s actions...” —Liza Wiemer, author of the Sydney Taylor Notable Book The Assignment

Declan Taylor is furious at the world. After winning state as a freshman starting pitcher, he accidentally messes up his throwing arm. Despite painful surgery and brutal physical therapy, he might never pitch again. And instead of spending the summer with his friends, Declan is forced to get a job to help his family out. On top of that, it seems like his best friend, Jake Lehrer, is flirting with Declan’s crush and always ditching him to hang out with the team or his friends from synagogue.

So Declan ends up playing a lot of Imperialist Empires online and making new friends. It’s there he realizes he’s been playing with Finn, a kid from his class. Finn is the first person who might be just as angry as Declan--he gets it. As the two spend more time together, Finn also introduces Declan to others who understand what it’s like when the world is working against you, no matter how much you try. How white kids like them are being denied opportunities because others are manipulating the system. And the more time Declan spends with Finn, the more he sees what they’re saying as true. So when his new friends decide it’s time to fight back, Declan is right there with them. Even if it means going after Jake and his family. And each new battle for the cause makes Declan feel in control of his rage, channeling it into saving his future. But when things turn deadly, Declan is going to have to decide just how far he’ll go and what he’s willing to sacrifice.

In a stunning story set against the rise of white nationalism comes an unflinching exploration of the destruction of hate, the power of fear, and the hope of redemption.


Praise For Some Kind of Hate…

Some Kind of Hate

“Thoughtful, meticulous, and devastatingly revealing, Some Kind of Hate opens readers’ eyes into how ordinary people--a neighbor, a classmate, a teammate, a friend--can become brainwashed and indoctrinated into the frightening and bigoted world of white supremacy. To stop hate, Sarah Darer Littman has written a critical, heart-wrenching, and hopeful book that not only shows how and why the seeds of hatred grow into a destructive force, but also the importance of owning one’s actions, which allows for the possibility of redemption and forgiveness.” --Liza Wiemer, author of the Sydney Taylor Notable Book The Assignment

“Littman’s latest novel presents an unvarnished and eye-opening account of how a frustrated young athlete becomes radicalized into a hate group, while examining the causes and consequences of unchecked antisemitism. This is truly a story for our times--a raw and visceral exploration of how a single, traumatic event in a person’s life can quickly turn him down the dark path toward extremism, and ultimately, redemption.” --Jonathan A. Greenblatt, CEO of the Anti-Defamation League

"Littman pens a raw, frighteningly realistic, and absorbing look at cyberbullying and the damaging effects of airing private trauma in a public forum." --Publishers Weekly

"This is a powerful and credible story." --Booklist

"This book is a compelling, if not disturbing, read." --School Library Journal

"With well-developed characters, Littman explores growth and personal relationships alongside pain, mental illness, and social issues -- showing how people can come together to heal." --Kirkus Reviews

In Case You Missed It

"Littman catches the voice of teen readers with her spot-on dialogue and realistic situations." --The Jewish Journal

"An intimate and powerful novel." --The Stamford Times

Sarah Darer Littman is the critically acclaimed author of Some Kind of Hate; Deepfake, Backlash; Want to Go Private?; Anything But Okay; In Case You Missed It; Life, After; and Purge. She is also an award-winning news columnist and teaches writing at Western Connecticut State University and with the Yale Writers' Workshop. Sarah lives in Connecticut with her family in a house that never seems to have enough bookshelves. You can visit her online at sarahdarerlittman.com.
Loading...
or support indie stores by buying on