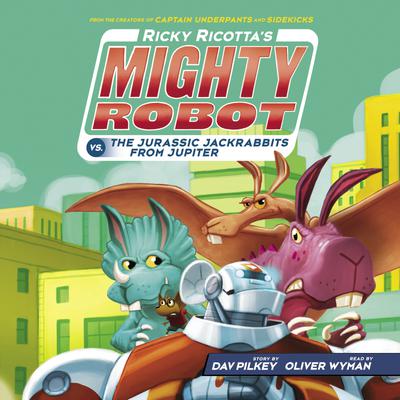 Ricky Ricotta and his Mighty Robot are ready for the best day ever!
Today is Ricky's birthday, and it's off to a great start! After peanut-butter pancakes and presents, Ricky's parents are taking him
and his Mighty Robot to see dinosaurs at the museum. And they have a surprise for Ricky: His cousin, Lucy, is coming with them!
Ricky thinks Lucy is a real pest. Suddenly, things aren't looking so sunny anymore.
At the museum, there is another surprise in store. General Jackrabbit, an evil genius from the planet Jupiter, is jumping for joy! He
has just created three Jurassic Jackrabbits to help him take over Earth. Can Ricky and his Robot beat these big, bad bunnies? Or
will this end up the WORST birthday ever?