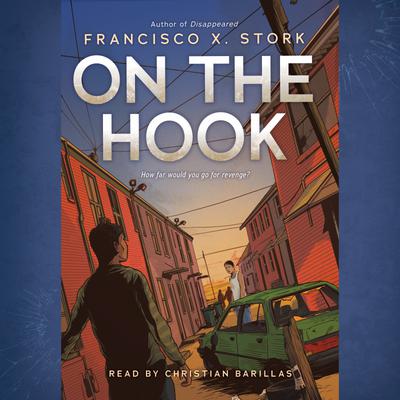 On the Hook (Digital Audiobook)

Hector has always minded his own business, working hard to make his way to a better life someday. He's the chess team champion, helps the family with his job at the grocery, and teaches his little sister to shoot hoops overhand.

Until Joey singles him out. Joey, whose older brother, Chavo, is head of the Discípulos gang, tells Hector that he's going to kill him: maybe not today, or tomorrow, but someday. And Hector, frozen with fear, does nothing. From that day forward, Hector's death is hanging over his head every time he leaves the house. He tries to fade into the shadows -- to drop off Joey's radar -- to become no one.

But when a fight between Chavo and Hector's brother Fili escalates, Hector is left with no choice but to take a stand.

The violent confrontation will take Hector places he never expected, including a reform school where he has to live side-by-side with his enemy, Joey. It's up to Hector to choose whether he's going to lose himself to revenge or get back to the hard work of living.

Francisco X. Stork is the author of Marcelo in the Real World, winner of the Schneider Family Book Award for Teens and the Once
Upon a World Award; The Last Summer of the Death Warriors, which was named to the YALSA Best Fiction for Teens list and
won the Amelia Elizabeth Walden Award; Irises; The Memory of Light, which received four starred reviews; and Disappeared,
which also received four starred reviews and was named a Kirkus Best Book of the Year. He lives near Boston with his wife. You
can find him on the web at franciscostork.com and @StorkFrancisco.