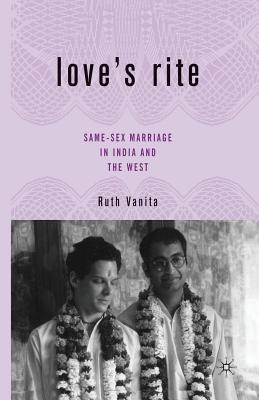 Same-Sex Marriage in India and the West

This is the first book to examine the same-sex weddings and same-sex couple suicides reported in India over the last two decades. Ruth Vanita examines these cases in the context of a wide variety of same-sex unions, from Fourteenth-century narratives about co-wives who miraculously produce a child together, to Nineteenth-century depictions of ritualized unions between women, to marriages between gay men and lesbians arranged over the internet. Examining the changing legal, literary, religious and social Indian and Euro-American traditions within which same-sex unions are embedded, she brings a fresh perspective to the gay marriage debate, suggesting that same-sex marriage dwells not at the margins but at the heart of culture. Love's Rites by Ruth Vanita is a finalist for a Lambda Literary Award.

RUTH VANITA is Professor of Liberal Studies and Women's Studies at the University of Montana, USA. She is the author of several books including Queer Love and Same-Sex Love in India.
Loading...
or support indie stores by buying on