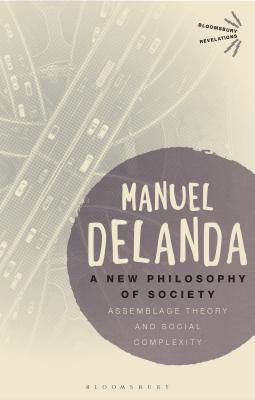 A New Philosophy of Society (Paperback)

In A New Philosophy of Society Manuel DeLanda offers a fascinating look at how the contemporary world is characterized by an extraordinary social complexity. Since most social entities, from small communities to
large nation-states would disappear altogether if our cognitive abilities ceased to exist, DeLanda proposes a
novel approach to social ontology that asserts the autonomy of social entities from the conceptions we have of them.

He argues that Gilles Deleuze's theory of assemblages provides a framework in which sociologists and geographers studying social networks and regions can properly locate their work and fully elucidate the connections between them. Indeed, assemblage theory, as DeLanda argues, can be used to model any community, from interpersonal networks and institutional organizations, to central governments, cities and nation states.

Manuel DeLanda is a distinguished writer, artist and philosopher. He began his career in experimental film, later becoming a computer artist and programmer. He is Gilles Deleuze Chair and Professor of Philosophy at The European Graduate School / EGS, Switzerland and lecturer in Architecture at Princeton University, USA. He is the author of Philosophical Chemistry (2015) and Philosophy and Simulation (2011).
or
Not Currently Available for Direct Purchase
Copyright © 2020 American Booksellers Association