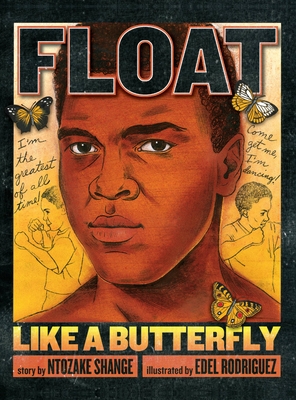 Muhammad Ali is considered by many to have been the finest athlete of the twentieth century. Here is a compelling testimony to his courage, resilience in the face of controversy, and boxing prowess by Obie Award-winning author Ntozake Shange. In her own words, Shange shows us Ali and his life, from his childhood in the segregated South, to his meteoric rise in boxing to become the Heavyweight Champion of the World. Edel Rodriguez's stunning artwork combines pastels, monoprint woodblock ink linework and spray paint on colored papers to capture Ali's power, spontaneity, and energy. A timeline and list of additional resources in the backmatter help make this a standout picturebook biography of the man known around the world as "The Greatest."

The reissue of this compelling portrait will have readers cheering once again for the late American icon.

Ntozake Shange, poet, novelist, playwright, and performer, wrote the Broadway-produced and Obie Award-winning For Colored Girls Who Have Considered Suicide/When the Rainbow Is Enuf. She has also written numerous works of fiction for adults, including Sassafras, Cypress and Indigo, Betsy Brown, and Liliane, as well as both fiction and nonfiction for children, including Coretta Scott, Ellington Was Not a Street, Daddy Says, and Whitewash. She lives in Brooklyn, New York.

Edel Rodriguez is a Cuban American artist who has exhibited internationally with shows in Los Angeles, Toronto, New York, Dallas, Philadelphia, and Spain. In 1994, Rodriguez graduated with honors in painting from Pratt Institute in Brooklyn, NY. In 1998, he received a Master of Fine Arts degree in painting from Manhattan's Hunter College graduate program. Throughout his career, Rodriguez has received commissions to create artwork for numerous clients, including The New York Times, TIME Magazine, The New Yorker, and many other publications and book publishers. Rodriguez's artwork is in the collections of a variety of institutions, including the Smithsonian Institute in Washington D.C., as well as in numerous private collections. Find his work online at edelr.com.

"Shange . . . has masterfully captured the unique cadence of Ali's voice as she offers an unabashedly positive story that will leave kids cheering and shadowboxing."—Booklist

"The action-packed illustrations are as dramatic as the text."—School Library Journal
or
Buy Here
Copyright © 2020 American Booksellers Association