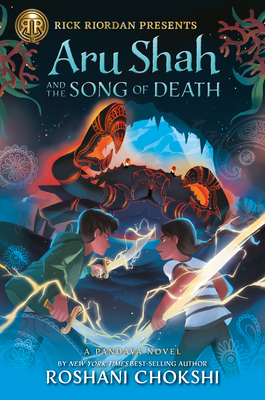 Aru is only just getting the hang of this whole Pandava thing when the Otherworld goes into full panic mode. The god of love's bow and arrow have gone missing, and the thief isn't playing Cupid. Instead, they're turning people into heartless fighting-machine zombies.

If that weren't bad enough, somehow Aru gets framed as the thief. If she doesn't find the arrow by the next full moon, she'll be kicked out of the Otherworld. For good.

But, for better or worse, she won't be going it alone. Along with her soul-sister, Mini, Aru will team up with Brynne, an ultra-strong girl who knows more than she lets on, and Aiden, the boy who lives across the street and is also hiding plenty of secrets.

Together they'll battle demons, travel through a glittering and dangerous serpent realm, and discover that their enemy isn't at all who they expected.

PRAISE FOR ARU SHAH AND THE SONG OF DEATH

*"Chokshi seamlessly weaves Indian cosmology and pop culture into a refreshingly feminist plot laced with witty dialogue. The most compelling feature of the novel, however, is the complexity of its characters, who, despite their divinity or semidivinity, are at their core very human. This will leave fans enthralled and clamoring for more."—Kirkus Reviews (starred review)

Roshani Chokshi is the author of the instant New York Times best-seller Aru Shah and the End of Time, the first book in a quartet for middle grade readers about the adventures of five Pandava sisters. Her acclaimed novels for young adults include The Star-Touched Queen and its companion, A Crown of Wishes, and The Gilded Wolves. The Pandava series was inspired by the stories her grandmother told her, as well as Roshani's all-consuming love for Sailor Moon. Rosh lives in Georgia and says "y'all," but she doesn't really have a Southern accent, alas. For more information, visit her website, www.RoshaniChokshi.com, or follow her on Twitter@Roshani_Chokshi and Instagram @roshanichokshi.
Loading...
or support indie stores by buying on