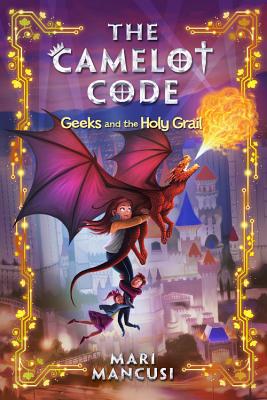 Geeks and the Holy Grail (The Camelot Code #2) (Hardcover)

Time travel, dragons, and saving the world? Sophie and Stu's spring break just got epic!
Sophie is now a Camelot Companion, tasked with protecting the spirit of King Arthur throughout the ages, so it's no surprise when she and Stu get sucked in to another Arthurian adventure. This time, the two best friends must get the Holy Grail into King Arthur's hands so he can drink from it and recover from a deadly illness. Simple, right?
Not so much. Because Merlin's apprentice, Emrys, has accidentally turned the Grail into a gassy, fire-breathing baby dragon. And Merlin is the only one who can change it back. But Merlin's on spring break in modern-day Las Vegas (at the Excalibur, of course). And Sophie's super-popular (not to mention super-annoying) future stepsister, Ashley, has invited herself along for the ride. From sneaking a baby dragon through airport security to the ultimate showdown with the sorceress Morgana, deep in the land of Faerie, this new Camelot Code adventure will test not only the two geeks' courage, but also their very friendship.
Don't miss a single moment of the action in this exciting sequel to The Camelot Code #1: The Once and Future Geek!

Praise For Geeks and the Holy Grail (The Camelot Code #2)…

PRAISE FOR THE ONCE AND FUTURE GEEK

PRAISE FOR THE ONCE AND FUTURE GEEK