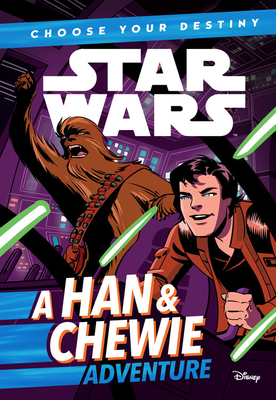 Jump inside the Millennium Falcon and help Han and Chewie as they journey across the galaxy on a simple smuggling job.
But nothing is ever simple with Han Solo, and when things go wrong, Han pretends to be Jabba the Hutt to save himself, Chewie, and the Millennium Falcon. And that’s when things go from bad to worse!
With over twenty possible outcomes, readers will have to think like a true smuggler to keep Han and Chewie safe from Imperial TIE fighters, Mandalorian mercenaries, and so much more!
With so many different story paths, the adventures never end!

Cavan Scott is one of the writers of Star Wars: Adventures in Wild Space and IDW Publishing’s Star Wars Adventures comic book series. When he’s not playing in a galaxy far, far away, Cavan has also written for such popular franchises as Doctor Who, Pacific Rim, Vikings, Star Trek, Adventure Time, and Penguins of Madagascar. You can find him online at www.cavanscott.com.

Elsa Charretier is a French comic book artist and comic book writer. After debuting on C.O.W.L. at Image Comics, Elsa cocreated The Infinite Loop with writer Pierrick Colinet at IDW. She has worked at DC Comics (Starfire, Bombshells, Harley Quinn), launched The Unstoppable Wasp at Marvel, and recently completed the art for the adaptation of Windhaven by George R. R. Martin and Lisa Tuttle (Bantam Books). She is currently writing two creator-owned series and has illustrated the first issue of Star Wars: Forces of Destiny for IDW.
Loading...
or
Not Currently Available for Direct Purchase