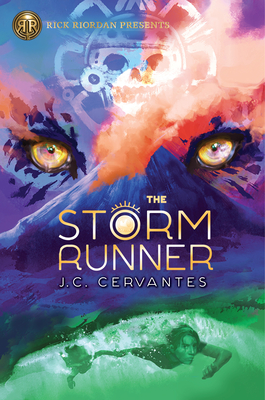 Best-selling author Rick Riordan presents J.C. Cervantes' contemporary adventure based on Maya mythology.
Zane has always enjoyed exploring the dormant volcano near his home in New Mexico, even though hiking it is challenging. He'd much rather hang out there with his dog, Rosie, than go to middle school, where kids call him Sir Limps a Lot, McGimpster, or Uno--for his one good leg.
What Zane doesn't know is that the volcano is a gateway to another world and he is at the center of a powerful prophecy. A new girl at school, Brooks, informs him that he's destined to release an evil god from the ancient Maya relic he is imprisoned in--unless she can find and remove it first.
Together they return to the volcano, where all kinds of crazy happens. Brooks turns into a hawk, a demon attacks them in a cave, and Rosie gives her all while trying to protect Zane.
When Zane decides to save his dog no matter the cost, he is thrust into an adventure full of surprising discoveries, dangerous secrets, and an all-out war between the gods, one of whom happens to be his father. To survive, Zane will have to become the Storm Runner. But how can he run when he can't even walk well without a cane?

"J. C. Cervantes is about to take you on a trip you will never forget, through the darkest, strangest, and funniest twists and turns of Maya myth. You will meet the scariest gods you can imagine, the creepiest denizens of the Underworld, and the most amazing and unlikely heroes who have to save our world from being ripped apart."
—Rick Riordan

"The Storm Runner takes us on a wild thrill ride through the Southwest, Los Angeles, and the spirit realm amidst all-night diners, delicious cups of hot chocolate, and Maya deities. A terrific read leading to an explosive page-turner of a finale!"—Daniel Jose Older, New York Times best-selling author of Shadowshaper

"A perfect storm of inspiring heroes, surprising twists, and some seriously scary monsters. This hilarious, expertly-plotted adventure keeps you racing through the pages and leaves you desperate for the next book (and craving a steaming mug of hot chocolate)!"
—Shannon Messenger, New York Times best-selling author of the Keeper of the Lost Cities series and the Sky Fall series

"The Storm Runner is brilliant, exhilarating, and funny. Its pages will burn in your hands, and Zane Obispo and the Maya gods will keep you up at night terrified and delighted! But beware, this book might reveal your own hidden magic."—Francisco X. Stork, author of Marcelo in the Real World

* "Zane is an instantly relatable character: he's frustrated by his circumstances and wants to do the right thing, though he often gets into trouble for fighting bullies or wandering off alone. Cervantes wastes no time getting right into the action, and her conversational tone and suspenseful pacing will keep the pages turning as the tension escalates and the characters face deepening stakes. Plentiful references to Mayan mythology and culture are bound to send readers searching for more background info, even with the glossary in the back matter. Don't miss this rip-roaring adventure."
—Booklist (starred review)

New York Times bestselling author J.C. Cervantes (www.jennifercervantes.com) also wrote Tortilla Sun, which was called "a beautiful and engaging debut" by Kirkus, an "imaginative, yet grounded novel" by Publishers Weekly, and "lean and lightly spiced with evocative metaphor" by School Library Journal. Tortilla Sun was a 2010 New Voices pick by the American Booksellers Association and it was named to Bank Street's 2011 Best Book List. Jen is an avid reader, a champion for the underdog, and a believer in magic. She is currently working on a sequel to this book, The Fire Keeper. Follow her on Facebook, Twitter: @jencerv, and Instagram: #authorjcervantes.
Loading...
or support indie stores by buying on