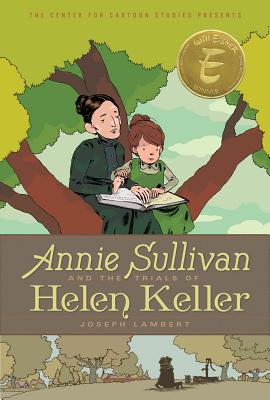 Helen Keller lost her ability to see and hear before she turned two years old.
But in her lifetime, she learned to ride horseback and dance the foxtrot. She graduated from Radcliffe. She became a world famous speaker and author. She befriended Mark Twain, Charlie Chaplin, and Alexander Graham Bell. And above all, she revolutionized public perception and treatment of the blind and the deaf.
The catalyst for this remarkable life's journey was Annie Sullivan, a young woman who was herself visually impaired. Hired as a tutor when Helen was six years old, Annie broke down the barriers between Helen and the wider world, becoming a fiercely devoted friend and lifelong companion in the process.
In Annie Sullivan and the Trials of Helen Keller, author and illustrator Joseph Lambert examines the powerful bond between teacher and pupil, forged through the intense frustrations and revelations of Helen's early education. The result is an inspiring, emotional, and wholly original take on the story of these two great Americans.

Joseph Lambert is an Eisner and Ignatz Award?winning cartoonist. A graduate of the Center for Cartoon Studies, he has drawn comics and illustrations that have appeared in Mome, The Best American Comics, Komiksfest! Review, and Dark Horse Presents, as well as in Business Week, Popular Mechanics, and I Will Bite You!, a collection of short stories published by Secret Acres.

* "[B]rilliantly conceived and executed. . . . [R]arely is [this story] presented in such a breathtaking, original, and empathetic fashion."—Booklist (starred review)

* "By emphasizing Paige's influence and mythos rather than focusing on details about his life and career, Sturm and Tommaso offer a powerful and unique testimony to his legacy."
—Publishers Weekly (starred review)

"[I]t's hard not to be moved by Lambert's depiction."—Horn Book

* "Porcellino creates a poetic alternation of words and silences that effectively draws the reader into Thoreau's point of view."—Kirkus Reviews (starred review)
or support indie stores by buying on
Copyright © 2020 American Booksellers Association