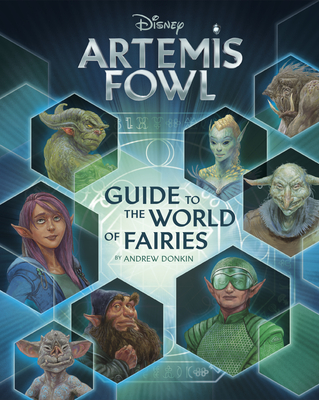 Guide to the World of Fairies

Now an original movie on Disney+!

This beautifully illustrated novel is a compendium of Artemis Fowl's knowledge gleaned from The Book of the People and from his encounters with magical creatures and the LEP. Compiling notes from the sacred fairy tome and Artemis's eventual plans to take down the LEP forces that stand in the way of his ultimate goal,

Artemis Fowl's Guide to the World of Fairies is a must-have for fans who are itching to dig deeper into the world of Artemis Fowl.

Disney's "Artemis Fowl," based on the beloved book series by New York Times best-selling author, Eoin Colfer, is a fantastical, spellbinding adventure that follows the journey of 12-year-old genius Artemis Fowl, a descendant of a long line of criminal masterminds, as he seeks to find his father who has mysteriously disappeared. With the help of his loyal protector Butler, Artemis sets out to find him, and in doing so uncovers an ancient, underground civilization-the amazingly advanced world of fairies. Deducing that his father's disappearance is somehow connected to the secretive, reclusive fairy world, cunning Artemis concocts a dangerous plan-so dangerous that he ultimately finds himself in a perilous war of wits with the all-powerful fairies.

Andrew Donkin (www.andrewdonkin.com) is the author of more than sixty adult and children's books. His work in comics includes Batman: Legend of the Dark Knight for DC Comics and he is the co-writer, with Eoin Colfer, of the graphic novel adaptations of the Artemis Fowl series and The Supernaturalist. Andrew lives near the river Thames in London.
Loading...
or support indie stores by buying on
(This book is on backorder)