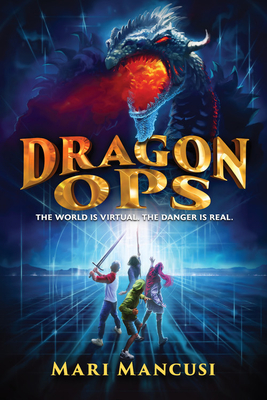 From the beloved author of The Once and Future Geek comes this action-packed adventure set in a futuristic world filled with magic, monsters, and high-tech video gaming.

One wrong move, and it's game over.

Welcome to Dragon Ops, the world's first augmented-reality video-game theme park. Set on a once-deserted island, our three beta players—classic gamer geek Ian; his adventure-seeking sister, Lily; and their too-cool-for-gaming cousin, Derek—have been lucky enough to score an invite to play before the fully immersive experience opens to the public.

But once inside, they find themselves trapped in a game taken over by a rogue AI dragon called Atreus, and suddenly the stakes go beyond the virtual world. With no cheat codes, guidebooks, save points, or do-overs, they'll need all their cunning and video-game hacks to beat the game . . . and survive in real life.

Action-packed and unputdownable, Dragon Ops will thrill gamers and reluctant readers alike with high-tech adventure and electrifying twists and turns.

Praise for Dragon Ops:
"Even reluctant readers are likely to find something to keep them engaged. . . . A fun, fast-paced read for video game fans, adventurers, and fantasy readers. Highly recommended."—School Library Journal

"With this adventure, Mancusi (Geeks and the Holy Grail) employs common gaming tropes, interweaving fantasy and mundane elements to create a world that feels familiar and yet enjoyably dangerous. The concepts--rogue AIs, theme parks gone haywire--may be well visited, but Mancusi successfully delivers a sense of urgency to her entertaining tale."—Publishers Weekly

Praise for The Once and Future Geek:

"A highly imaginative twist on the legend of King Arthur, complete with time travel, programming, and fierce friendships, The Camelot Code is the perfect pick for tweens who love medieval lore and geek culture in equal measure!"—Christina Soontornvat, author of The Changelings series

"A wholesome, modern twist on the classic legend that could provide a gateway for newer readers and fun for the gaming set."—Kirkus Reviews

"Dashes of romance, bullying, social anxiety, family stresses, commentary on middle school social structure, and bits of history and Arthurian lore all combine to create a thought-provoking adventure story... Blending elements of several genres, this story will be appealing to many different types of readers."—School Library Journal

"Arthurian legends just leveled up in this hilariously geeky, modern, and clever take on The Sword in the Stone. A Connecticut Yankee in King Arthur's Court meets Ready Player One for the middle-grade set."—Julie Leung, author of the Mice of the Round Table series

"Boys and girls will ditch their video games and be sucked into the delightful world of (future) King Arthur and his unlikely saviors, Sophie and Stu. An absolute delight!"—Jen Calonita, author of the Fairy Tale Reform School series

"Imagine The Sword in the Stone with a dash of Freaky Friday and a pinch of World of Warcraft--this funny, fast-paced adventure is chicken soup for the geek's soul."—Zack Loran Clark and Nick Eliopulos, authors of The Adventurers Guild