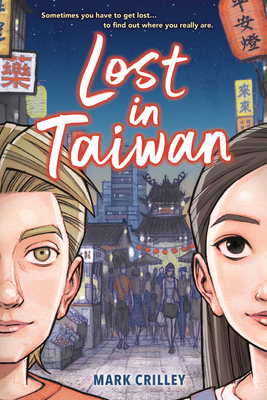 Lost in Taiwan (A Graphic Novel)

A story about stepping out of your comfort zone—literally—on an unlikely journey to making new connections and learning to explore the big wide world around you, Lost In Taiwan is the latest from celebrated graphic novelist Mark Crilley.

The last thing he’s interested in is exploring new countries or experiencing anything that might be described as “cultural enrichment.” But like it or not, he’s stuck with his brother, Theo, for two weeks in Taiwan, a place that—while fascinating to Theo—holds no interest to Paul at all.

While on a short trip to a local electronics store, Paul becomes hopelessly lost in Taiwan’s twisting, narrow streets, and he has no choice but to explore this new environment in his quest to find his way back to Theo’s apartment.

In an unfamiliar place with no friends—and no GPS!—there’s no telling what adventures he could happen upon. And who knows? Maybe it turns out he has friends in Taiwan, after all.

Mark Crilley is the author and illustrator of more than forty books, including several acclaimed graphic novels, for which he has received fourteen Eisner Award nominations. His work has been featured in USA Today, Entertainment Weekly, and on CNN Headline News. His popular YouTube videos have been viewed more than 400 million times. He lives in Michigan with his wife, Miki, and children, Matthew and Mio.
Loading...
or support indie stores by buying on