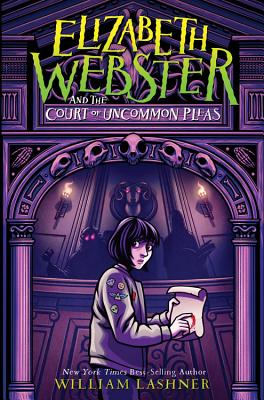 Elizabeth Webster and the Court of Uncommon Pleas

Welcome to Elizabeth Webster's world, where the common laws of middle school torment her days . . . and the uncommon laws of an even weirder realm govern her nights.

Elizabeth Webster is happy to stay under the radar (and under her bangs) until middle school is dead and gone. But when star swimmer Henry Harrison asks Elizabeth to tutor him in math, it's not linear equations Henry really needs help with-it's a flower-scented, poodle-skirt-wearing, head-tossing ghost who's calling out Elizabeth's name.

But why Elizabeth? Could it have something to do with her missing lawyer father? Maybe. Probably. If only she could find him. In her search, Elizabeth discovers more than she is looking for: a grandfather she never knew, a startling legacy, and the secret family law firm, Webster & Son, Attorneys for the Damned.

Elizabeth and her friends soon land in court, where demons and ghosts take the witness stand and a red-eyed judge with a ratty white wig hands out sentences like sandwiches. Will Elizabeth's father arrive in time to save Henry Harrison-and is Henry the one who really needs saving?

Set in the historic streets of Philadelphia, this riveting middle-grade mystery from New York Times bestselling author William Lashner will have readers banging their gavels and calling for more from the incomparable Elizabeth Webster.

William Lashner is a former criminal prosecutor with the Department of Justice in Washington D.C. and a graduate of the Iowa Writers' Workshop. His novels have been published worldwide and nominated for two Shamus Awards, a Gumshoe Award, an Edgar Award, and been selected as an Editor's Choice in the New York Times Book Review. When he was a kid his favorite books were The Count of Monte Cristo and any comic with the Batman on the cover. Elizabeth Webster and the Court of Uncommon Pleasis his first novel for young readers.
Loading...
or support indie stores by buying on