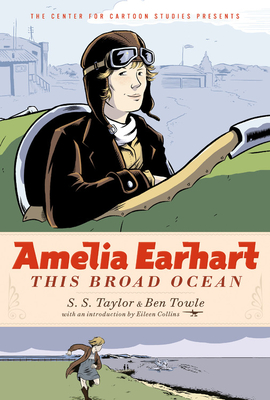 This Broad Ocean (The Center for Cartoon Studies Presents)

"Women must try to do things as men have tried. When they fail, their failure must be but a challenge to others." -Amelia Earhart
Amelia Earhart developed a love of flying at a very young age. What began as a simple joy became something much deeper--a commitment to open doors for all women. As Amelia built a name for herself in the field of aviation - breaking numerous records along the way - she inspired future trailblazers to soar to new heights.
With an introduction by astronaut pioneer Eileen Collins, Amelia Earhart: This Broad Ocean focuses on Amelia's triumphant crossing of the Atlantic Ocean in 1928. Panel by panel, it offers a glimpse of her relentless ambition and tireless will to promote women's rights. Above all, it leaves us with a sense of her deep-rooted desire to touch the sky.

Praise For Amelia Earhart: This Broad Ocean (The Center for Cartoon Studies Presents)…

"[A] lively biography. . . . With sure-handed, irreverent illustrations, [Fawkes] captures life on the windswept moors and masters the art of Victorian side-eye. Her Charlotte Bront is as smart, brooding, and rebellious as Jane Eyre, and her volume offers an accessible introduction to and an elaboration on the Bront s' work."—Publishers Weekly

"A biography that goes beyond static history, inspiring respect for Charlotte and encouraging writers and artists to defend their work through adversity."—Kirkus Reviews

ALA Best Book for Young Adults

* "Porcellino creates a poetic alternation of words and silences that effectively draws the reader into Thoreau's point of view."—Kirkus Reviews (starred review)

* "Brilliantly conceived and executed. . . . Rarely is [this story] presented in such a breathtaking, original, and empathetic fashion."—Booklist (starred review)

S. S. Taylor is the author of the Expeditioners series of steampunk adventure novels for middle grade readers, with illustrations by Katherine Roy. The first book in the series, The Expeditioners and the Treasure of Drowned Man's Canyon, was nominated for both the Dorothy Canfield Fisher Award and the Texas Bluebonnet Award. She lives on a farm in Vermont with her husband, three kids, three cats, ten chickens, and fourteen sheep.

Ben Towle is an Eisner Award-nominated cartoonist and comics educator. Some of his other books include Oyster War, Midnight Sun, and Farewell, Georgia. Ben lives in Winston-Salem, North Carolina.
Loading...
or support indie stores by buying on