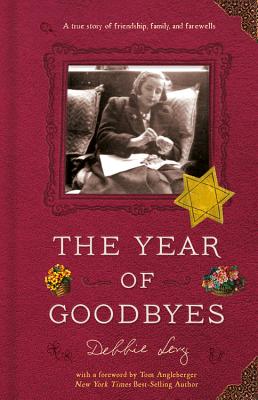 The Year of Goodbyes (Hardcover)

A true story of friendship, family and farewells

Like other twelve-year-old girls, Jutta Salzberg enjoyed playing with friends, going to school, and visiting relatives. In Germany in 1938, these everyday activities were dangerous for Jews. Jutta and her family tried to lead normal lives, but soon they knew they had to escape-if they could, before it was too late.

Throughout 1938, Jutta had her friends and relatives fill her poesiealbum-her autograph book-with inscriptions. Her daughter, Debbie Levy, used these entries as a springboard for telling the story of the Salzberg family's last year in Germany. It was a year of change and chance, confusion and cruelty. It was a year of goodbyes.

Debbie Levy (www.debbielevybooks.com) is the award-winning author of nonfiction and fiction books for young people, including New York Times best-selling I Dissent: Ruth Bader Ginsburg Makes Her Mark, winner of the 2017 Sydney Taylor Book Award and 2016 National Jewish Book Award; We Shall Overcome: The Story of a Song, a 2014 Jane Addams Award Honor Book and Bank Street College Best Book; and This Promise of Change (with Jo Allen Boyce). The Year of Goodbyes is a Sydney Taylor Notable Book, Kirkus Reviews Best Book, VOYA (Voice of Youth Advocates) Nonfiction Honor Book, and National Endowment for the Humanities Nonfiction Favorite. Debbie wrote this book in consultation with her mother, Jutta Salzberg Levy, to reflect Jutta's voice, feelings, and thoughts as a girl. A former lawyer and newspaper editor, Debbie lives in Maryland with her husband. They have two grown sons. Jutta died in 2013, just before her eighty-seventh birthday.

Praise For The Year of Goodbyes: A true story of friendship, family and farewells…

* "Artfully weaving together her mother's poesiealbum (autograph/poetry album), diary, and her own verse, Levy crafts a poignant portrait of her Jewish mother's life in 1938 Nazi Germany that crackles with adolescent vitality."—Publishers Weekly (starred review)

"This would work effectively as an introductory class readaloud to the era, and it would appeal to readers who like their friendship tales grounded in history and truth."—Bulletin of the Center for Children's Books

* "Remarkable. . . . An arresting, soulful tribute to the power of music and the shared humanity that underlies conflict."—Booklist (starred review)

* "Through insightful narration and vibrant silhouettes and cartooning, Levy (I Dissent) and Ford (The Marvelous Thing That Came from a Spring) vividly bring to life a chapter in the U.S. Civil War and the integral role music played during the conflict."—Publishers Weekly (starred review)

"Powerful. . . . An innovative capturing of history through the lens of a song and a passionate affirmation of human rights."—Booklist

"An inviting introduction to a spirited and spiritual anthem. . . . Informative and engaging."—Kirkus Reviews

"Detailed and beautiful. . . . This handsome book will be highly useful for classroom and family discussions."—School Library Journal
or support indie stores by buying on
Copyright © 2020 American Booksellers Association