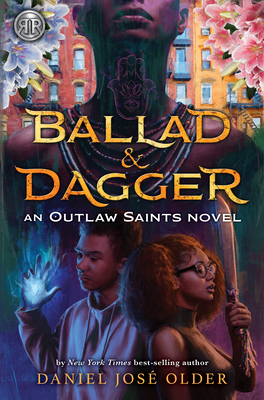 Best-selling author Rick Riordan presents Daniel José Older's music-and-magic-filled YA urban fantasy about two teens who discover each other and their powers during a political battle within a unique diaspora community.

"Brimming with mystery, mayhem, and heart, Ballad and Dagger gives us wondrous new magic steeped in deep traditions. It's a gorgeous romance, a wild adventure, and a powerful story that unravels not only the pain of diaspora, but the strength of community and the ways we provide refuge for one another."--Leigh Bardugo, New York Times #1 best-selling author of Shadow and Bone

"A new, magical world full of rich folklore and hitting all the right notes."--Kirkus Reviews

While the rest of his tight-knit Brooklyn diaspora community dreams of someday finding a way back home, Mateo--now a high school junior and piano prodigy living with his two aunts (one who's alive, the other not so much)--is focused on one thing: getting the attention of locally-grown musical legend Gerval. Mateo finally gets his chance on the night of the Grand Fete, an annual party celebrating the blended culture of pirates, Cuban Santeros, and Sephardic Jews that created San Madrigal all those centuries ago.

But the evil that sank their island has finally caught up with them, and on the night of the celebration, Mateo's life is forever changed when he witnesses a brutal murder by a person he thought he knew.

Suddenly Mateo is thrust into an ancient battle that spans years and oceans. Deadly secrets are unraveled and Mateo awakens a power within himself--a power that not only links him to the killer but could also hold the key to unlocking the dark mystery behind his lost homeland.

From the author of the award-winning Shadowshaper Cypher series comes the first novel in the Outlaw Saints duology--a brilliant story that will transport readers to a world where magic, myth, and gods reign over the streets of Brooklyn.

Don't miss these other Rick Riordan Presents titles for all ages:

"Ballad Dagger is a symphony of a book. Daniel Jose Older immerses readers in a sweeping epic about the power of ancient forces within the evolving reality of diaspora, all while balancing humor, magic, and romance. This is a story about teenagers who are willing to crack open history itself in order to find the truth, and Mateo Matisse is a hero worthy of song."—Tracy Deonn, New York Times best-selling author of Legendborn.

"A striking adventure . . . The first entry for YA readers from Rick Riordan Presents offers the same heart and adventure that work so well in the imprint's middle-grade titles, with the addition of Older's finely tuned teenage voice and worldbuilding details that will make readers long for a place that feels believable enough to be real. The first book of the duology ends on a satisfying note, leaving readers excited for the conclusion. A new, magical world of rich folklore and hitting all the right notes."—Kirkus Reviews

"Brimming with mystery, mayhem, and heart, Ballad Dagger gives us wondrous new magic steeped in deep traditions. It's a gorgeous romance, a wild adventure, and a powerful story that unravels not only the pain of diaspora, but the strength of community, and the ways we provide refuge for one another."—Leigh Bardugo, New York Times #1 best-selling author of Shadow and Bone

"San Madrigal is as real as Wakanda or the Shire or Earthsea. Once you read Ballad Dagger, you will see what I mean. Only the best authors can make me feel nostalgic for a place that never existed but needs to exist, and Daniel Jose Older is one of the best."—New York Times #1 best-selling author Rick Riordan

Daniel José Older is a New York Times best-selling author and story architect. He has published fourteen novels and numerous short stories and essays, and he is a regular comics writer for Star Wars: The High Republic Adventures and Marvel. He won the International Latino Book Award and has been a finalist for the Kirkus Prize, the Mythopoeic Award, the Locus Award, the Andre Norton Award, and the World Fantasy Award. You can find his thoughts on writing, read dispatches from his decade-long career as an NYC paramedic, and hear his music at http://danieljoseolder.net, as well as on YouTube, @djolder on Twitter, @danieljose1 on Instagram, and @danieljoseolder on TikTok. He lives with his wife and son in New Orleans.
Loading...
or support indie stores by buying on