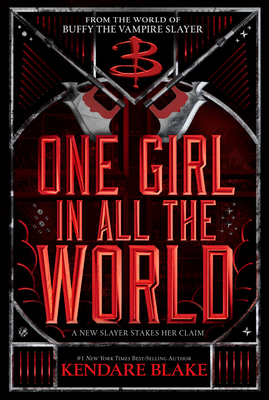 One Girl In All The World (Buffy

The Next Generation, Book 2): In Every Generation Book 2

"A worthy successor to the Slayer stories." —Booklist (starred review for In Every Generation)

Into every generation, a slayer is born. One girl in all the world . . . sort of.

Frankie Rosenberg is the world's first slayer-witch, but she doesn't have that slay-life balance figured out just yet. She's still reeling from the deadly explosion at the anual slayer retreat—and new evidence that some slayers may have survived. And while she's defeated her first Big Bad, Frankie soon realizes it was just a warm-up act. Bigger, badder forces of evil are just getting started.

The Hellmouth has been reawakened and its calling old friends home. Portals are opening between Sunnydale and other dimensions. And the Scooby Gang has too many demons to contend with—real, metaphorical, and sometimes absurdly hot.

Then an oracle warns of a new foe on its way: the Darkness. Could this be what attacked the slayers? And is it coming for Frankie?

New York Times best-selling author Kendare Blake takes readers back to the demon capital of the world in this sequel to In Every Generation.

Praise For One Girl In All The World (Buffy: The Next Generation, Book 2): In Every Generation Book 2…

A propulsive read…satisfyingly blends humor and lightheartedness with gruesome action, compelling mystery, and a dash of taboo romance.
—Kirkus Reviews<br><br>

Kendare Blake is the #1 New York Times best-selling author of the Three Dark Crowns series, the Anna Dressed in Blood duet, All These Bodies, and others. She lives and writes in Gig Harbor, Washington, from under a pile of dogs and cats.
Loading...
or support indie stores by buying on