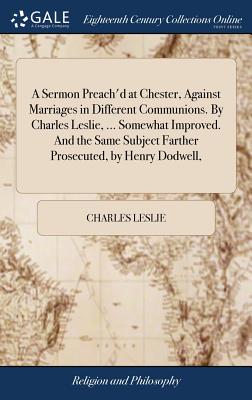 A Sermon Preach'd at Chester, Against Marriages in Different Communions. by Charles Leslie, ... Somewhat Improved. and the Same Subject Farther Prosec

Also issued with a titlepage reading: 'Concerning marriages in different communions .. Prosecuted by Henry Dodwell'. With a half-title.