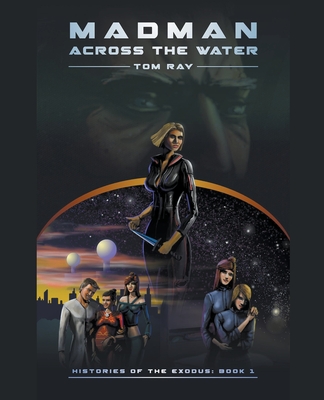 Madman Across the Water

Madman Across The Water introduces the world to the nation of Atlanteas.

Revered for its navy and merchants trading to all corners of the world, Plato's Kingdom of Atlantis disappeared below the waves in a day and a night, taken by the Gods.

Yet, could such a civilization so quickly die?

The world of 1801 lives without knowing the survivors of Atlantis restored their nation, evolving as a hidden civilization. Off the Atlantic Coasts of the Americas, the City-States of the Nation of Atlanteas, 7 Major Domes, and 14 Minor Domes were carved into the bedrock of the seafloor over millennia. Seventy-five million people live lives using wonders not yet possible in the opening of the 21st Century. As the Industrial Age builds, slavery of the Colonial Age is becoming unsustainable worldwide - and a parallel revolution begins in the world's most advanced civilization.

Atlantean scientists Addon Greis and Shan'na Anavan are opening a new chapter for humanity, finding a path to the stars is within the grasp of their generation. They need one final tool to create this new reality, one made possible when Nassiti Passur, rogue R dd Priestess, comes into their lives. They prepare to give birth to a forbidden form of life; photonic beings, artificial intelligence evolving to understand human feelings and emotions, connecting directly to the mind of their human companions.

From childhood, Science Council Elder Pieter Lo ke believed AI killed Pacifica Dome. Proclaimed the Master Assassin in the Shadow Guard secret police in his early career, he ascends to power, wealth, and control of disruptive technology. But he is a man who lost nearly all he ever valued.

Lisul Pacella, the career guardian of the Atlantean National Archives, has found dark secrets of the Shadow Guard and Science Council. Threatened by Lo ke's Cabal, can she survive to bring their crimes to justice?.

How far will Pieter go to stop Lisul, Addon, Shan'na, and Nassiti? Will he risk the heart of his civilization, those on the Nile Delta, and the life of the woman he loves, to exact vengeance for a tragedy which already cost him his family?

After peace for a thousand years, will this become the civil war foretold by the Rodd Priestesses?
Madman Across the Water - Histories Of The Exodus: Volume 1 - 560 Pages Paperback