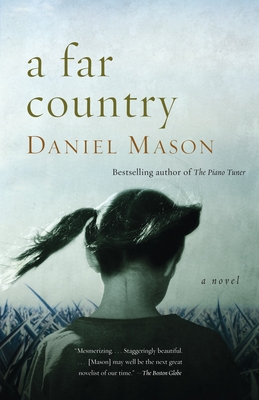 From the bestselling author of The Piano Tuner, a stunning novel about a young girl’s journey through a vast, unnamed country in search of her brother.Fourteen-year-old Isabel was born in a remote village with the gift and curse of “seeing farther.” When drought and war grip the backlands, her brother Isaias joins a great exodus to a teeming city in the south. Soon Isabel must follow, forsaking the only home she’s ever known, her sole consolation the thought of being with her brother again.

Daniel Mason was born and raised in Northern California. He studied biology at Harvard, and medicine at the University of California, San Francisco. His first novel, The Piano Tuner, published in 2002, was a national bestseller and has since been published in 27 countries. His other works include A Far Country. Mason has also published a short story, on the life of the artist Arthur Bispo de Rosario, in Harper's Magazine. He lives in the San Francisco Bay Area.


Praise For A Far Country…

“Mesmerizing. . . . Staggeringly beautiful . . . [Mason] may well be the next great novelist of our time.” —The Boston Globe

“Penetrating. . . . Mason’s power as a storyteller is to plunge the reader into a world so perfectly detailed that we don’t just see it through the protagonist’s eyes. All of our senses are engaged.”—San Francisco Chronicle

“A Far Country is a book about . . . people who live as subsistence farmers or flee their land to scrabble for a living in the smog-choked megacities of the south. . . . But for a bit of historical luck, its ‘far country’ might be Britain, America or anywhere else.” —The New York Times Book Review

“With both boldness and circumspection. . . . Mason writes in stripped-down prose that strives toward a sort of meditative lucidity.” —Chicago Tribune