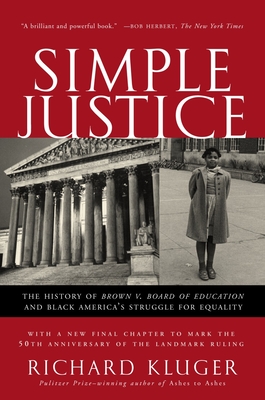 The History of Brown v. Board of Education and Black America's Struggle for Equality

Simple Justice is the definitive history of the landmark case Brown v. Board of Education and the epic struggle for racial equality in this country. Combining intensive research with original interviews with surviving participants, Richard Kluger provides the fullest possible view of the human and legal drama in the years before 1954, the cumulative assaults on the white power structure that defended segregation, and the step-by-step establishment of a team of inspired black lawyers that could successfully challenge the law. Now, on the fiftieth anniversary of the unanimous Supreme Court decision that ended legal segregation, Kluger has updated his work with a new final chapter covering events and issues that have arisen since the book was first published, including developments in civil rights and recent cases involving affirmative action, which rose directly out of Brown v. Board of Education.

Praise For Simple Justice: The History of Brown v. Board of Education and Black America's Struggle for Equality…

“One of the most important books published in our American times. . . . A major accomplishment.” —Philadelphia Inquirer

“A thought-provoking work that should become part of the standard literature on race relations.” —New York Times Book Review

“The definitive account, to date, of the struggle for black equality in America. . . . A monumental accomplishment.” —The Nation

“This huge, fascinating book . . . classic in its clarity and dimensions . . . should become part of our nation’s scriptures.” —Chicago Sun-Times

“An extraordinary research effort, and a major contribution to our understanding of the Supreme Court.” —Harvard Law Review

“A brilliant and powerful book.”–Bob Herbert, The New York Times

“A remarkable act of scholarship. . . . A book about values. . . . Its reader should be prepared to be moved.” –The Atlantic Monthly

“A remarkable book, moving and intellectually rich, mixing scholarship and humanity as it explores the modern Supreme Court’s most important decision.” –Anthony Lewis

“An exciting story of an American happening as important as the Revolution itself. . . . Superb narrative history.” –Kansas City Star

Richard Kluger, a Princeton graduate, worked as a journalist with The Wall Street Journal, New York Post, and the New York Herald Tribune, on which he was the last literary editor, before entering book publishing.  After serving as executive editor at Simon and Schuster and editor-in-chief at Atheneum, he turned to writing fiction and social history.  He is the author of six novels (and two others with his wife, Phyllis), two National Book Award finalists–Simple Justice and The Paper (a history of the Herald Tribune)–and a Pulitzer Prize-winning history of the American cigarette business, Ashes to Ashes.  He and his wife now live in Berkeley, California.
Loading...
or support indie stores by buying on