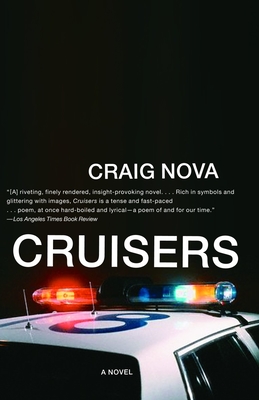 As a child Frank Kohler learned of his mother’s brutal murder. Now, years later, he yearns for some affirmation that remains elusive. As a state trooper on the night shift, Russell Boyd cruises the highways of Vermont constantly reminded of the true depths of human misery. The lives of these two men will intersect only tangentially, until fate catches up with them.

CRAIG NOVA is the award-winning author of ten novels. His writing has appeared in Esquire, The Paris Review, The New York Times Magazine, and Men’s Journal, among others. He lives in Putney, Vermont.

“A riveting, finely rendered, insight-provoking novel. . . . Rich in symbols and glittering with images, [Cruisers] is a tense and fast-paced . . . a poem, at once hard-boiled and lyrical--a poem of and for our time.” --Tom Nolan, Los Angeles Times“Dynamite. . . . Like Graham Greene or Albert Camus...”  -- The Denver Post

“Compulsive and relentless.” -- The Boston Globe

“Craig Nova takes readers on a spine-chilling journey. . . . Cruisers moves with breakneck speed. Written with clarity and vivid detail, the book is troubling, but poignant--burrowing into that shadowy, universal fear of uncertainty and malice. This book haunts, lingering in the mind long after the last page." --The Baltimore Sun

"Profound and mysterious. . . . A fascinating picture of the skewed dimensions of American life. . . . He is one of the country's most gifted novelists." --Chicago Tribune

“Something out of the ordinary from the very beginning.” --Peter Straub, The Washington Post“Cruisers finds Nova at the top of his form. It’s a novel as visceral and noirish and, yes, symphonic as any he’s written. . . . Unnerving and profound.” --The Seattle Times
or
Not Currently Available for Direct Purchase
Copyright © 2020 American Booksellers Association