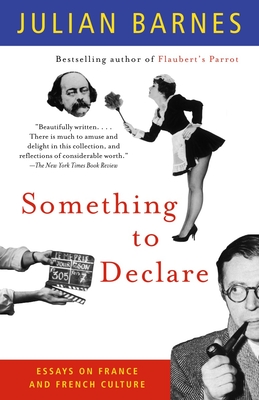 Anyone who loves France (or just feels strongly about it), or has succumbed to the spell of Julian Barnes’s previous books, will be enraptured by this collection of essays on the country and its culture.

Praise For Something to Declare: Essays on France and French Culture (Vintage International)…

“Beautifully written. . . . There is much to amuse and delight in this collection, and reflections of considerable worth.” —The New York Times Book Review

“Offers insight into the political, literary and sporting culture of a nation, with brilliant and engaging results. . . . Barnes displays here his nose for the extraordinary detail and the comic moment of phrasing.” —San Francisco Chronicle

“Julian Barnes seems to have done more for Anglo-French relations than anyone since Edward VII.” –Daily Telegraph (London)

“Barnes does indeed have numerous things to declare . . . and he does so with profound insight and biting intelligence. . . . Barnes conveys his passions with infectious vigor.” –Minneapolis Star Tribune

“Something to Declare is supremely enjoyable. . . . A tour de force.” –Fort Worth Star-Telegram

“[Barnes’] insights are intelligent and provocative, his turn of phrase stylish and witty.” –Winston-Salem Journal

“Barnes is humorous throughout this collection, attenuating the stress of cultural intersections.” –St. Louis Post-Dispatch

Born in Leicester, England, in 1946, Julian Barnes is the author of nine novels, a book of stories, and a previous collection of essays. His work has been translated into more than thirty languages. In France he is the only writer to have won both the Prix Médicis and the Prix Fémina, and in 1988 he was made a Chevalier de l’Ordre des Arts et des Lettres. He lives in London.
Loading...
or
Not Currently Available for Direct Purchase