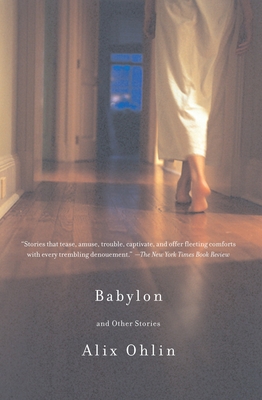 Babylon and Other Stories (Vintage Contemporaries)

In their various locales--from Montreal (where a prosthetic leg casts a furious spell on its beholders) to New Mexico (where a Soviet-era exchange student redefines home for his hosts)--the characters in Babylon are coming to terms with life's epiphanies, for good or ill.

They range from the very young who, confronted with their parents' limitations, discover their own resolve, to those facing middle age and its particular indignities, no less determined to assert themselves and shape their destinies. Babylon and Other Stories showcases the wit, humor, and insight that have made Alix Ohlin one of the most admired young writers working today.

Praise For Babylon and Other Stories (Vintage Contemporaries)…

"Unforgettable. . . . Though many of her characters are suffering, the stories are never maudlin, and the people are sympathetic and real. . . . Passionate and warm."
—San Francisco Chronicle

"With language intensely evocative and keenly focused on the nuances that define each of us as individuals, Ohlin delves into the lives of her characters--even in her shortest pieces--and reveals a depth to them, a poignancy, that is deeply affecting."
—The Baltimore Sun

Alix Ohlin was born in Montreal in 1972, graduated from Harvard University, and studied at the Michener Center for Writers in Austin, Texas. Her fiction, which has appeared in the One Story series and Shenandoah, among other periodicals, has been selected for both Best New American Voices 2004 and Best American Short Stories 2005. She has received awards and fellowships from The Atlantic Monthly, the MacDowell Colony, and The Kenyon Review's Writers Workshop. She lives in Easton, Pennsylvania, and teaches at Lafayette College.
Loading...
or
Not Currently Available for Direct Purchase