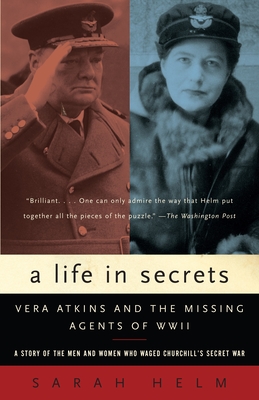 A Life in Secrets

Vera Atkins and the Missing Agents of WWII

From an award-winning journalist comes this real-life cloak-and-dagger tale of Vera Atkins, one of Britain’s premiere secret agents during World War II.
As the head of the French Section of the British Special Operations Executive, Vera Atkins recruited, trained, and mentored special operatives whose job was to organize and arm the resistance in Nazi-occupied France. After the war, Atkins courageously committed herself to a dangerous search for twelve of her most cherished women spies who had gone missing in action. Drawing on previously unavailable sources, Sarah Helm chronicles Atkins’s extraordinary life and her singular journey through the chaos of post-war Europe. Brimming with intrigue, heroics, honor, and the horrors of war, A Life in Secrets is the story of a grand, elusive woman and a tour de force of investigative journalism.


Praise For A Life in Secrets: Vera Atkins and the Missing Agents of WWII…

“Brilliant. . . . One can only admire the way that Helm put together all the pieces of the puzzle.” —The Washington Post“Fascinating. . . . Compelling. . . . Gripping. . . . A stupendous job of reporting.” —The New York Times“Helm's account is a chilling reminder of the ghastliness of WWII.” —Entertainment Weekly“A Life in Secrets is a work of history that is at once a compelling thriller, an intriguing mystery, and a biography of bravery. . . . Better than CSI because it is all true and inspiring.” —Tina Brown

Sarah Helm is the author of Ravensbruck: Life and Death in Hitler's Concentration Camp for Women and A Life in Secrets: Vera Atkins and the Missing Agents of WWII and the play Loyalty, about the 2003 Iraq War. She was a staff journalist on the Sunday Times (London) and a foreign correspondent on the Independent, and now writes for several publications. She lives in London with her husband and two daughters.