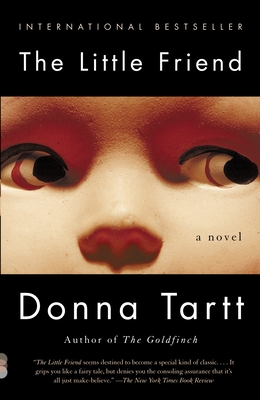 The second novel by Donna Tartt,  bestselling author of The Goldfinch (winner of the 2014 Pulitzer Prize),  The Little Friend  is a grandly ambitious and utterly riveting novel of childhood, innocence and evil.


The setting is Alexandria, Mississippi, where one Mother’s Day a little boy named Robin Cleve Dufresnes was found hanging from a tree in his parents’ yard. Twelve years later Robin’s murder is still unsolved and his family remains devastated. So it is that Robin’s sister Harriet—unnervingly bright, insufferably determined, and unduly influenced by the fiction of Kipling and Robert Louis Stevenson--sets out to unmask his killer. Aided only by her worshipful friend Hely, Harriet crosses her town’s rigid lines of race and caste and burrows deep into her family’s history of loss. Filled with hairpin turns of plot and “a bustling, ridiculous humanity worthy of Dickens” (The New York Times Book Review), The Little Friend is a work of myriad enchantments by a writer of prodigious talent.

“The Little Friend seems destined to become a special kind of classic. . . . It grips you like a fairy tale, but denies you the consoling assurance that it's all just make-believe.” —The New York Times Book Review

“At times humorous, at times heartbreaking, The Little Friend is most surprising when it is edge of the seat scary.” —USA Today

“Harriet [is] one of the most engaging and rounded characters you are likely to find. . . . Tartt’s writing: gorgeous, fluent, visual.” —The Times (London)

“Languidly atmospheric . . . psychologically acute. . . . A rich novel that takes you somewhere worth going.” —The New Yorker

“A terrific story. . . . Tartt etches each of these characters with indelible assurance.” —Newsweek

Donna Tartt won the 2014 Pulitzer Prize for her most recent Novel. The Goldfinch Her novelsl The Secret History and The Little Friend were also international bestsellers. She was born in Greenwood, Mississippi, and is a graduate of Bennington College.