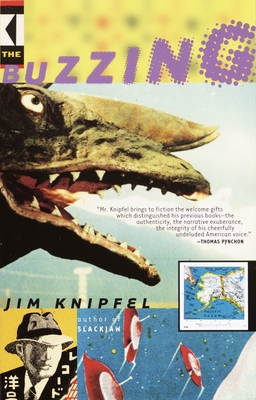 Meet Roscoe Baragon–crack reporter at a major (well, maybe not that major) metropolitan newspaper. Baragon covers what is affectionately called the Kook Beat–where the loonies call and tell him in meticulously deranged detail what it’s like to live in their bizarre and lonely world. Lately Baragon’s been writing stories about voodoo curses and alien abductions; about fungus-riddled satellites falling to earth and thefts of plumbing fixtures from SRO hotels by strange aquatic-looking creatures. Not exactly New York Times material.

Maybe it’s the radioactive corpse that puts him over the edge. Or maybe it’s the guy who claims to have been kidnapped by the state of Alaska! But Baragon is now convinced that a vast conspiracy is under way that could take the whole city down–something so deeply strange that it could be straight out of one of the old Japanese monster movies that he watches every night before he goes to sleep. But stuff like this only happens in the movies. Right?

The Buzzing marks the fictional debut of the acclaimed author of Slackjaw. It is a novel of deep paranoia and startling originality. And it could certainly never happen. Right? Right?

Praise For The Buzzing (Vintage Contemporaries)…

"The Balzac of the bin is at it again. With this paranoid Valentine to New York–and to a certain saurian colossus noted for his own ambivalent feelings about large cities–Mr. Knipfel now brings to fiction the welcome gifts which distinguished his previous books–the authenticity, the narrative exuberance, the integrity of his cheerfully undeluded American voice." –Thomas Pynchon