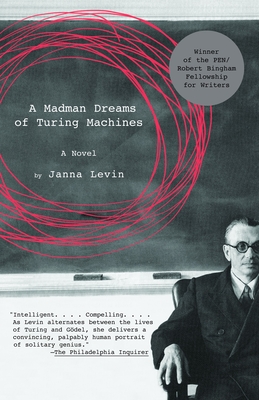 A Madman Dreams of Turing Machines

Kurt Gödel’s Incompleteness Theorems sent shivers through Vienna’s intellectual circles and directly challenged Ludwig Wittgenstein’s dominant philosophy. Alan Turing’s mathematical genius helped him break the Nazi Enigma Code during WWII. Though they never met, their lives strangely mirrored one another—both were brilliant, and both met with tragic ends. Here, a mysterious narrator intertwines these parallel lives into a double helix of genius and anguish, wonderfully capturing not only two radiant, fragile minds but also the zeitgeist of the era.


Praise For A Madman Dreams of Turing Machines…

Born in Texas and raised in Chicago, Janna Levin is currently a professor of mathematics and physics at Barnard and Columbia universities. She holds a Ph.D. from the Massachusetts Institute of Technology and has been Scientist-in-Residence at the Ruskin School of Drawing and Fine Art at the University of Oxford and an Advanced Fellow in the Department of Applied Mathematics and Theoretical Physics at Cambridge University. Levin is the author of How the Universe Got Its Spots, published in 2003 by Anchor.