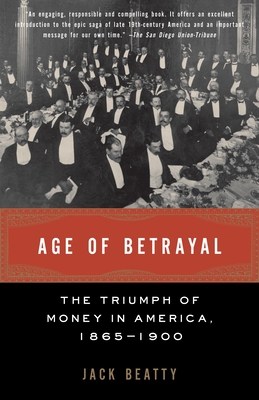 Age of Betrayal is a brilliant reconsideration of America's first Gilded Age, when war-born dreams of freedom and democracy died of their impossibility. Focusing on the alliance between government and railroads forged by bribes and campaign contributions, Jack Beatty details the corruption of American political culture that, in the words of Rutherford B. Hayes, transformed “a government of the people, by the people, and for the people” into “a government by the corporations, of the corporations, and for the corporations.” A passionate, gripping, scandalous and sorrowing history of the triumph of wealth over commonwealth.

“An engaging, responsible and compelling book. It offers an excellent introduction to the epic saga of late 19th-century America and an important message for our own time.” —The San Diego Union-Tribune“Illuminated and enlivened. . . . [Beatty's] ability to hot-wire our history to the here and now is what gives Age of Betrayal its distinctive bite.” —Los Angeles Times Book Review“Readers will immediately by impressed by the range of subject matter he can handle, from political, economic, and constitutional history to the history of labor, social movements and time. . . . Absorbing in its detail and refreshingly uncompromising in its perspective.” —The Boston Globe.“A shocking, heart-breaking account of corruption and just plain meanness.” —The Providence Journal

Jack Beatty is a senior editor of The Atlantic and news analyst for On Point, the national NPR news and public affairs program. His book The Rascal King on legendary Boston mayor James Michael Curley won an American Book Award, was shortlisted for the NBCC award, and was one of USA Today's 10 Best Books of the Year. He was the editor of Colossus, a book on corporations, which was named one of the 10 Best Business Books of the Year by Business Week. He was a Poynter Fellow at Yale, the recipient of a Guggenheim Fellowship, two Alfred P. Sloan Foundation research grants, a William Allen White Award for Criticism, and shared an Olive Branch Award for an Atlantic article on arms control. He lectures frequently throughout the country.
Loading...
or
Not Currently Available for Direct Purchase