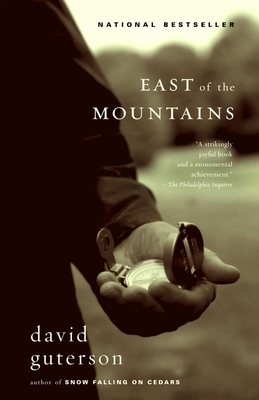 From the author of Snow Falling on Cedars comes this bestselling novel about a dying man’s final journey through a landscape that has always sustained him and provided him with hope and challenges.

When he discovers that he has terminal cancer, retired heart surgeon Ben Givens refuses to simply sit back and wait. Instead he takes his two beloved dogs and goes on a last hunt, determined to end his life on his own terms. But as the people he meets and the memories over which he lingers remind him of the mystery of life’s endurance, his trek into the American West becomes much more than a final journey.

David Guterson is the author of a collection of short stories, The Country Ahead of Us, the Country Behind; Family Matters: Why Homeschooling Makes Sense; Snow Falling on Cedars, which won the 1995 PEN/Faulkner Award, the Pacific Northwest Bookseller Association Award, and was an international bestseller; and the national bestseller East of the Mountains.

Praise For East of the Mountains (Vintage Contemporaries)…

”A strikingly joyful book and a monumental achievement.” —The Philadelphia Inquirer

“The writing is wonderful throughout, the characters are vivid…heartfelt, engaging and well drawn.” —The Miami Herald

“Profound and ambitious. . . . Guterson depicts . . . moral and spiritual struggle with a clear-eyed intensity and intelligence that gives East of the Mountains its essential authority.” —Chicago Tribune

“The shape is elegant, the tone is perfectly controlled, almost cool, and Guterson’s prose shines with [a] taut polish. . . .[He] is a craftsman with a sense of literary history, one of the most serious and accomplished young American writers.” –The Atlanta Journal-Constitution

“Guterson possesses a remarkable gift for capturing people and places, etching them into the reader’s mind.” –USA Today

“Elegiac . . . like his first novel, Guterson’s sophomore outing is a serious and surprising book. . . . A monumental achievement.” –The Philadelphia Inquirer

“In describing the world of a dying man, Guterson invokes the ultimate book of suffering–then, to his great credit, offers it here as a consolation rather than despair.” –The Boston Sunday Globe

“This book would be a challenge to praise too highly. It resounds with clarity. It feels like home.” –The San Diego Union-Tribune

“[Guterson] has produced a clean, unpretentious and expert piece of work, filled with the immediate beauty of everyday life and the desolation of leaving it behind.” –The Washington Times

“Wonderfully written, tender toward its characters, and full of incident and insight.” –Men’s Journal