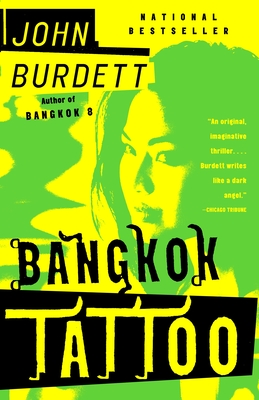 Detective Sonchai Jitpleecheep of the Royal Thai Police returns in his riveting and smokily atmospheric new thriller.A farang–a foreigner–has been murdered, his body horribly mutilated, at the Bangkok brothel co-owned by Sonchai’s mother and his boss. The dead man was a CIA agent. To make matters worse, the apparent culprit is sweet-natured Chanya, the brothel’s top earner and a woman whom the devoutly Buddhist sleuth has loved for several lifetimes. How can Sonchai solve this crime without sending Chanya to prison? How can he engage in a cover-up without endangering his karma? And how will he ever get to the bottom of a case whose interested parties include American spooks, Muslim fundamentalists, and gangsters from three countries? As addictive as opium, as hot as Sriracha chili sauce, and bursting with surprises, Bangkok Tattoo will leave its mark on you.

John Burdett is a nonpracticing lawyer who worked in Hong Kong for a British firm until he found his true vocation as a writer. Since then, he has lived in France and Spain and is now back in Hong Kong.

“An original, imaginative thriller. . . . Burdett writes like a dark angel.” –Chicago Tribune “You will read on and on, with wide-eyed fascination, some horror. . . and considerable delight. . . . If you’re looking for a good time, look no further.” –The Washington Post Book World “Mesmerizing: a comic tour of the underbelly of Bangkok in pursuit of both a murderer and the sublime.”–The New Yorker
or
Not Currently Available for Direct Purchase
Copyright © 2020 American Booksellers Association