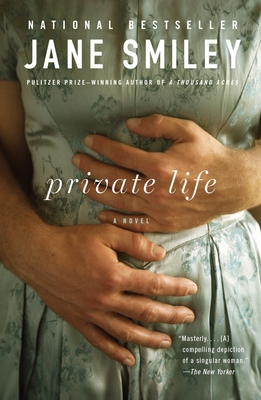 Here is the powerful, deeply affecting story of one Margaret Mayfield, from her childhood in post–Civil War Missouri to California in the throes of World War II. When Margaret marries Captain Andrew Jackson Jefferson Early at the age of twenty-seven, she narrowly avoids condemning herself to life as an old maid. Instead, knowing little about marriage and even less about her husband, she moves with Andrew to his naval base in California. Margaret stands by Andrew during tragedies both historical and personal, but as World War II approaches and the secrets of her husband’s scientific and academic past begin to surface, she is forced to reconsider the life she had so carefully constructed.

A riveting and nuanced novel of marriage and family, Private Life reveals the mysteries of intimacy and the anonymity that endures even in lives lived side by side.

Jane Smiley is the author of numerous novels, including A Thousand Acres, which was awarded the Pulitzer Prize, and most recently, Golden Age, the concluding volume of The Last Hundred Years trilogy. She is also the author of five works of nonfiction and a series of books for young adults. A member of the American Academy of Arts and Letters, she has also received the PEN Center USA Lifetime Achievement Award for Literature. She lives in Northern California.

“Masterly. . . .[A] precise, compelling depiction of a singular woman.” –The New Yorker

“Extraordinarily powerful. . . .It’s not often that a work as exceptional as this comes along in contemporary American letters.” –Washington Post

“Smiley’s best novel yet. . . . [A] heartbreaking, bitter, and gorgeous story.” –The Atlantic Monthly

“Remarkable. . . . With its quietly accruing power, [Private Life is] the kind of book that puts the lie to those who claim that great novelists produce their best work early and spend the rest of their lives gilding the lily.” —Chicago Tribune

“Has a Jamesian twist of the unforeseen, but it’s achieved with a sureness of hand that’s all [Smiley’s] own.” —The New York Times Book Review

“Smiley’s eye is keen, and the book’s historical pageant is often mesmerizing and often elegantly composed. . . . A quiet tragedy.” —The Seattle Times

“Private Life, perhaps Jane Smiley’s best novel since her Pulitzer Prize-winning A Thousand Acres, is so firmly anchored in its historical setting that the past comes to seem like the reader’s present.” —The Oregonian

“Smiley tells her story precisely. . . . Private Life has a stunning specificity of detail. . . . Husband and wife are three-dimensional, alive and memorable in the way characters in fiction and people in biographies so rarely are.” —The Miami Herald

“Brilliant. . . . A story of immense originality and insight. . . . It is served well by the fascinating era in which it is set, and most of all by Smiley’s wit and erudition.” —The Philadelphia Inquirer

“A book whose enormous power sneaks up on you. . . . Unlike so many contemporary novels, which start out sure-footed but eventually lose focus, this novel keeps getting better.” –The Newark Star Ledger

“Powerful. . . . Smiley is a wonderful writer. . . . [She] creates a convincing, nuanced portrait of a woman’s life when women had few options.” —San Diego Union-Tribune

“Brilliant. . . . Private Life is a powerful, challenging and, ultimately, fierce work of fiction, a masterpiece of a novel that stands with the best of Smiley’s work.” —The Guardian (UK)

“A fine portrait. . . . [Private Life] should only enhance Smiley’s reputation as one of the most innovative and accomplished writers currently at work.” —The Times Literary Supplement (London)

“Richly detailed. . . . I read parts of Smiley’s novel to my mother and, afterward, we found ourselves wondering about our dead female relatives. . . . They lived, they sorrowed; maybe now we understand them a little better than before.” —Susan Swan, The Globe and Mail (Toronto)

How would you describe this novel in one sentence?

Smiley’s epigraph for the book is a quote from Rose Wilder Lane. Why do you think she chose this particular line?

What is the purpose of the prologue? How did it color your interpretation of what followed?

Over the course of this novel—which stretches across six decades of American history—how does the role of women change? How might Margaret’s life—and marriage—have been different were she born later?

This is a book that begins and ends with war—starting in a Missouri that is just emerging from the destruction of the Civil War, concluding in California on the eve of World War II. Margaret’s personal life is also punctuated by historical events, the San Francisco Earthquake among them. How does this history affect the lives of the characters? How does Margaret’s story offer the reader a different perspective on the larger life of the nation?

On page 80, Smiley writes, “Margaret began to have a fated feeling, as if accumulating experiences were precipitating her toward an already decided future.” Do you think her fated feeling proved accurate? Was marrying Andrew a choice she made, was the decision that of both of their mothers, or was it dictated by the time and place?

Lavinia tells Margaret, “A wife only has to do as she’s told for the first year” (page 91). When does Margaret finally take this advice? Why? Do you think this is good advice or manipulative?

Compare Lavinia’s advice with the counsel in the letters Margaret finds from Mrs. Early to Andrew. Whose is more useful? More insightful? Do you find Mrs. Early’s behavior toward Margaret and her mother deceitful?

What does Dora represent to Margaret? If she could trade places with her, do you think Margaret would? How does Dora think of Margaret? Do Margaret and Dora have anything in common? If not, what do you think brings them together?

Margaret and Andrew are both devastated by their son Alexander’s death, yet they react in different ways. How does Andrew’s perspective on this tragedy—that of a scientist and a man who believes in logical explanations—differ from Margaret’s? How does Alexander’s death change their marriage? Might things have been different if he had lived? Why or why not?

Thinking about Alexander’s death leads Margaret to think about her brothers and father and the way they died (page 172). Why do you think Private Life opens with descriptions of their deaths? Margaret thinks that their deaths must have been worse for her mother than Alexander’s was for her; do you agree?

What is the nature of Dora’s relationship to Pete? What do they get from each other? Pete and Andrew are both liars, yet very different men—but they also seem to get along. What, if anything, do you think they share? And how are they different from each other?

Discuss Andrew’s theories of the universe, and his academic dishonesty. Can you think of a modern-day analogue? If he were exposed today, what would happen to him?

Andrew Early is a scientist who is described to us at first as a genius. But it turns out to be more complex than that, and for as many of his ideas that are right (the earthquake, the moon craters) others are wrong (ether, double stars). Do you think it’s at all accurate to describe him as a “genius”—or even a “mad genius?” How does “science” augment the overall story the novel is telling?

What role does Len Scanlan play in the novel, and in Margaret’s evolving perception of her husband and his work? Why doesn’t Margaret tell Andrew about Len’s indiscretions with Helen Branch?

Margaret falls in love with a family of birds—coots—that live in a nearby pond. Why do you think they grow to mean so much to her? What is the significance of the coots to this story of a marriage?

Japanese art plays a significant part in the novel. What does it represent to Margaret? How does it tie Margaret to the Kimura family?

At several points in the novel, Margaret gets a glimpse of how others see her. But how does she see herself? Is her self-image more or less accurate than Andrew’s?

Reread the passage on page 345, about Dora’s reflections on human beings, birds, and freedom. What is Margaret’s reaction? How has Dora changed in the course of the novel? How does this compare to the ways in which Margaret changes?

Is Pete the great love of Margaret’s life? What effect does he have on her and the decisions she makes? If Andrew discovered the truth of this relationship, would he feel as wronged by her as she feels by him?

Why does Andrew denounce the Kimuras and Pete? Does he have an ulterior motive?

Do you think Andrew’s reports are taken seriously—is he responsible for the Kimuras being arrested, or was their fate inevitable given the time and place? Does Andrew’s behavior add a new dimension to your understanding of the World War II internment?

On page 372, when Margaret tells Andrew that The Gift is a picture of Len Scanlan, what does she mean?

Jane Smiley has revealed that the characters of Margaret and Andrew are very loosely based on “my grandfather’s much older sister [and] her husband, an eccentric family uncle . . . infamous in the physics establishment.” Yet most of the story’s details are fictional. Does knowing this change the way you see Margaret and her story?