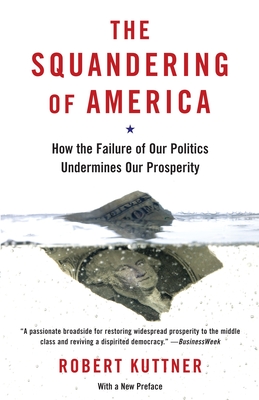 The Squandering of America

How the Failure of Our Politics Undermines Our Prosperity

A passionate, articulate argument detailing how the United States political system has failed to adapt to the economic challenges of the late 20th and early 21st centuries.

The American economy is in peril. It has fallen hostage to a casino of financial speculation, creating instability as well as inequality. Tens of millions of workers are vulnerable to layoffs and outsourcing, health care and retirement burdens are increasingly being shifted from employers to individuals. Here Kuttner debunks alarmist claims about supposed economic hazards and exposes the genuine dangers: hedge funds and private equity run amok, sub-prime lenders, Wall Street middlemen, and America's dependence on foreign central banks. He then outlines a persuasive, bold alternative, a new model of managed capitalism that can deliver security and opportunity, and rekindle democracy as we know it.

Praise For The Squandering of America: How the Failure of Our Politics Undermines Our Prosperity…

“A passionate broadside for restoring widespread prosperity to the middle class and reviving a dispirited democracy.”—BusinessWeek "With seven years' distance from the Clinton era, [Kuttner's] arguments now look emphatically right." —The New York Times Book Review“Robert Kuttner is a prophet whose time has come. This lucid, passionate, razor-sharp book carries a message as urgent as it is clarifying.”—Hendrik Hertzberg “Robert Kuttner has diagnosed the sickness in our body politic.”—The Boston Globe

Robert Kuttner is a founder and co-editor of The American Prospect magazine. He wrote a column for Business Week for twenty years, and he also has a weekly column in The Boston Globe and many other papers. He has published two books with Knopf--Everything for Sale (1997) and The End of Laissez Faire (1991).
or
Not Currently Available for Direct Purchase